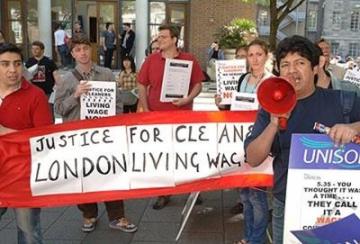 Workers in contract cleaning face low wages, a lack of basic employment rights, bullying management and victimisation for union activities. However, especially among Latin Americans, self-organisation has sustained struggles against their unscrupulous multi-national employers, and the fight against the immigration controls which are used to sack unwanted workers and victimise union activists.

Contractors use immigration controls to sack unwanted workers and to punish them for organising. A favourite tactic is to organise an immigration raid under the pretext of “health and safety” training, where workers are detained by riot police and immigration officials and subject to fast track deportation if they can’t prove the right to work in the UK. Another is to claim that National Insurance numbers under which NI has been paid by workers for years are “suspicious” and to call workers in for immigration checks, knowing that anyone whose status is questionable will disappear – redundancy without the costs.

Grassroots struggles highlight the inadequacy of the “organising model” of trades unionism favoured by the social democratic unions who believe that capitalism can and should be managed better to benefit workers. To do this they have to work with the bosses, and get the Labour Party to provide a legislative framework to force the former to do so. A top-down model of large, passive unionised workforces, negotiation controlled by full-time officials and a concentration on “headline” issues such as the London Living Wage rather than the full range of workers’ concerns is their objective.

Social democrats see the fact that these cleaning contractors are rich multinational companies as meaning they should be more willing to pay better wages to their workers as they can “afford” it. In fact, they are rich precisely because they are constantly cutting costs on their existing contracts and winning more contracts through undercutting their competitors. As well as giving their investors a greater return this attracts further investment and keeps the share price up. Their wealth proves they are ruthless, but makes them attractive “partners” for the social democrats.

Consequently, the Justice4Cleaners campaign organised by T&G/Unite! has concentrated on “easy targets” and neglected small groups of workers in “hard to organise” workplaces. Cleaners sacked by Amey at the National Physical Laboratory (NPL) in Teddington outside London, working for Lancaster at Schroders bank and for Mitie at Willis insurance company in the City of London have organised themselves, and showed up the unions and why they find such workers “hard to organise”.

These campaigns have been sustained by support from the Latin American Workers Association, No Borders and the Campaign Against Immigration Controls. Other supporters have included SF members from the two London Locals. Noise pickets have been organised at contractors’ offices, and outside events organised or attended by their clients, to embarrass them into taking responsibility for the contractors’ actions.

Our aim should not just be to shame capitalists into acting against their own interests, but to expose their true nature and to advocate their abolition. The existing unions cannot and will not do this; it is not just the methods but the aims and objectives of the social democrats which fail the working class.