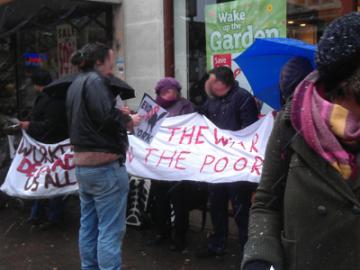 Despite the freezing temperatures and snow showers on Saturday 23rd March, members of Feminist Fightback, North London Solfed, Boycott Workfare and other local groups, residents and anti-workfare protesters picketed Argos in Leytonstone and Poundland in Wembley.

In Leytonstone, for a large demonstration the reception from the public was generally very positive, with residents driving past slowing down and opening windows asking for leaflets. Plenty of people stopped to chat despite the cold.

We picketed Argos as part of the Boycott Workfare week of action and we were originally going to picket Superdrug as well who pulled out a day before the demo; no doubt in part due to pressure from anti-workfare groups and campaigns across the country.

A smaller, but no less determined, picket outside Poundland in Wembley helpfully guided shoppers towards other stores as the area has a veritable plethora of pound shops to choose from. We are determined to cause economic damage to companies using workfare and we will return until they stop.

We thank Boycott Workfare for organising the week of action and Feminist Fightback for helping to organise these pickets and strongly encourage campaigners to hold pickets in their local area to help kill workfare. If you would like Solidarity Federation to help you organise a picket in your area, you can contact us at northlondonsf(at)solfed.org.uk

This article was published on 26 March 2013 by the SolFed group in North London. Other recent articles: