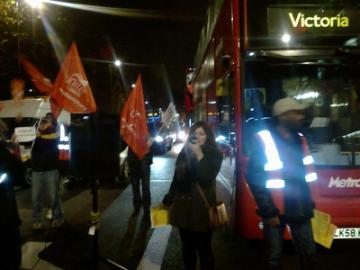 On Wednesday evening (15 Feb) a large, vibrant and noisy protest was held by electricians and their supporters outside the Grosvenor hotel on Park Lane. The protest was part of the ongoing struggle that electricians and other JIB trades find themselves in.
Their fight is with the 7 major construction companies (known as the BESNA 7) who to increase their profits want to massively reduce the wages of the workers.
Under The Building Engineering Services National Agreement (BESNA) electricians, plumbers, welders & pipe fitters stand to loose up to £240 per week if they sign these new contracts.

In true blockade style traffic was stopped on Park Lane for well over an hour and leaflets were handed to drivers and pedestrians explaining the reason for the protest. Passionate speeches were well received, drum & bass, punk and reggae blasted from the speakers and there was even an attempt to start a conga, which was short-lived, (thankfully).

The police can’t have done their homework as they took an age to arrive and then in small numbers. The Police sergeant looked for a leader to negotiate with, no leader could be found, we were all sparks-ticus.

After some pushing & shoving one lane was finally opened to let traffic through. Roadblock over we gathered at the entrances of the Grosvenor this was when Ken Livingston arrived, not to give support but as the guest speaker at Electrical Contractors’ Association (ECA) annual diner.

Inside The Grosvenor at this £105 a head black tie event, along with traders and Government departments, were representatives of the BESNA 7, the reason for this protest.

This struggle is about workers organising and taking the fight to the bosses themselves, against cooperate greed and the exploitation of workers.

This article was published on 18 February 2012 by the SolFed group in North London. Other recent articles: