No contracts, unsure of the terms of employment, working to the whim of management, sound familiar? We are currently in a dispute with  Upper Crust Hove (no not the yellow chain everywhere) the one in West Hove’s golf club.

The worker came to Solfed for help after not being paid her full notice period pay, following having her hours changed upon them, which in effect forced them to leave employment.

This was not a mutual agreement; this was punishment for taking an agreed holiday which management forgot about.

Due to the fact nothing was laid out before hand, the ambiguity of terms and conditions leaves the power to management to do as they  please. That is until workers start fighting for themselves.

Brighton SolFed has started a dispute against the Western road branch of the letting agency Leaders. The agency facilitated an eviction attempt against a tenant that failed after a court hearing. SolFed has been trying to find a settlement for the dispute the last couple of weeks. Along with SolFed, the tenant is fighting for compensation for loss of earnings and damage to her health. 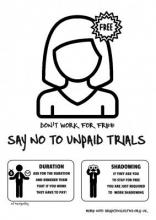 Some workplaces in Brighton, including hospitality companies like pubs, restaurants and hotels, to hospitals, care agencies and the building trade, employers ask potential employees to come and work a 'trial shift' to see if they are up to the job.

Byron Burgers acted despicably when they collaborated with the Home Office to deport their workers during a fake training event on July 4th. After the story broke from Spanish language newspaper El Iberico a number of groups and unions with Byron worker members have organised and called for action against Byron (see list below)

In a joint leaflet we demand:
no more threats to staff by immigration enforcement!
no discrimination against migrant staff members.
no to exploitative pay and conditions.

Manchester Solidarity Federation has entered a dispute with Laibaz, a restaurant in Bolton. A number of the restaurant’s former employees are owed wages for hours worked and holiday entitlement. The restaurant's owner has paid workers at an hourly rate below the minimum wage and has failed to provide pay slips. He also failed to provide P45s when workers left their jobs at the restaurant.

We started the campaign by organising a phone blockade on Saturday July 23, aimed at preventing “take away” orders. The blockade was a tremendous success and we are confident that the restaurant was unable to take any orders between the hours of 6pm and 10pm, the busiest period of the week for take away orders. The workers involved would like to thank people for their fantastic support in making the blockade a success.

Last month, Cheese & Toast, a cafe in Lewes Road, paid one of its former workers after having been contacted by SolFed.

Manchester Solidarity Federation rejects both the ‘leave’ and ‘remain’ options presented in the EU referendum and are especially appalled by the overt racism and xenophobia that accompanied the campaign to leave the EU. This was a referendum brought about by the Tories simply to appease their racist right wing and prevent defections to UKIP prior to last year’s general election.