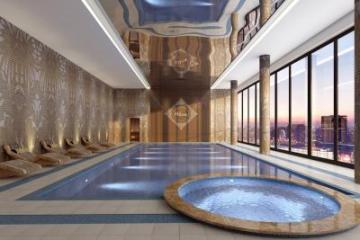 Cuddly Jeremy’s fight to turn the Labour Party into a red blooded socialist party has some way to go, if Manchester is anything to go by. The city is virtually a one party mini-state with Labour holding 95 of the 96 council seats, so the perfect place, you would have thought, to start the Labour fight back against austerity and inequality in the UK. Well…, not quite!

Leaked documents show that, out of a total of 15,000 new homes approved by Manchester’s Labour Council in the last two years, most of them around the city centre, just a paltry 47 could be classed as socially affordable housing! Manchester City Council does have a policy that any developments containing more than 16 properties must contain 20% affordable provision. However, Labour has inserted a nifty “get out of jail” clause, which allows developers to pay a penalty fee which enables them to totally ignore the policy. This has allowed developers to get on with the much needed task of providing luxury homes in the centre of Manchester, freed from the unnecessary burden of having to include social housing, which would, according to the leaked Labour Party documents, “undermine significant development proposals critical to economic growth within the city” – developments such as the planned huge Renaker city centre development, containing 1,508 luxury apartments and boasting a 25 metre swimming pool, tennis court, 1,900 square foot gym and roof terrace.

Before any bleeding heart liberals amongst you start banging on, it should be stressed that the money handed over by developers to exclude social housing has been used to fund the 47 affordable social housing units planned by the council. Needless to say these 47 homes will be built well away from the glitzy city centre in some of the most deprived areas of Manchester. And quite right too! After all, you don't want a bunch of chavs, or worse, their children, spoiling the view from the window of your luxury apartment!

In response to complaints that money is being poured into the city centre while the rest of the city is being starved of funds, the deputy leader of the council was at pains to explain that 40% of people in Manchester live within a 20 minute drive to the centre so can enjoy all that the centre has to offer. Leaving aside the other 60% of us being left to rot on the massive “sink” estates on the “outskirts” of Manchester, you have to wonder what form of transport the deputy leader must be using to get about Manchester. He must be a mate of Dr Who because it takes everyone else 20+ minutes just to get out of the city centre in Manchester’s permanent traffic jams.

In any case, most of those lucky people who live close enough to enjoy the delights of the award winning 21st century city centre will not be using the bus to get there. Manchester City Council has just announced yet more cuts to the already ravaged bus service which has already seen 8,000+ bus miles axed in the last two years alone. It is not hard to guess that most of the cuts will fall on those who need buses the most, those in the deprived areas of the city. We have now reached the point where, in many of the poorest areas of Manchester, bus services are reduced to once an hour after 6pm and on Sundays, with night buses now being an urban myth, talked about by older Mancunians with faulty memories. Compare this with the student areas of the city, where there are that many competing buses they actually cause traffic jams and where there is an overabundance of night buses. But then again, do we really want drunken estate youths spoiling the ambiance of our southern European café style culture, so lovingly crafted in the centre by our beloved Labour council leaders.

When challenged over cuts to bus services Manchester’s Labour council, when it can be bothered, blames it all on deregulation and those nasty Tories. However, this “not me, guv” approach really does not wash. The truth is that this Labour council has embraced the free market with such enthusiasm that it would have made the dear, late Maggie Thatcher blush. One minute, Manchester was a “nuclear free zone”, whatever that meant; the next minute, everything was either being privatised, outsourced or sold off – even then the Town Hall has been sold and leased back! The shopping centre in one estate, part of which had been renamed Leningrad Square by the well-meaning idiots of the Labour left when they were in control, was completely sold off and is now run by a private company, including, alas, Leningrad Square. With the council working hand in glove with the local trade union bureaucracy, any resistance to privatisation was opposed, marginalized or gradually worn down, often with the tacit support of local union leaders.

The latest resistance is the Mears dispute. After council leaders broke a promise that a housing maintenance contract in the north of the city would never be handed to the appalling Mears Group PLC, maintenance workers were soon involved in a protracted struggle with Mears. Although this dispute is a rarity in that it was won, the workers involved complained bitterly about the lack of any kind of support from the Labour Council and the fact that not one of the 95 Labour councillors had attended a single event or picket line. There was even suggestions of corruption. Our beloved free market Labour council leaders involved in corruption? Surely not!

No doubt the more Corbyn-inclined amongst you will be nodding your heads and telling yourselves that this is the whole point of the Corbyn revolution – getting rid of the likes of the Blairite functionaries who run Manchester and building a democratic alternative. As the seemingly decent, but equally naïve, Owen Jones put it in the Guardian, the next job of the Labour Party General Secretary would be to “build a democratic, pluralistic, transformative mass movement firmly rooted in local communities”.

And there was good news on that front with the “election” of the appalling, Corbyn-backed Jennie Formby as General Secretary of the Labour Party. After a year or two in her teens when she actually had a job – and even then she craved escape – this privately educated, machine-like politician had applied for her first full time union job at 19, and has spent all of her adult life as a union official, furthering her career within the totally undemocratic world of trade union bureaucracy. Just the sort of person to put your trust in to bring about a “transformation” to democratic change. Mind you, it could have been worse; Momentum’s Jon Lansman might have got the job, a man you truly wouldn't want to buy a used car from.

It seems odd that you set about building a democratic, transforming movement, rooted in the local community by trying to take control of the Labour Party and trade union officialdom. This is a world devoid of democracy and one that is dominated by factionalism, egos, naked ambition and full of truly awful people. It is a twilight zone completely divorced from the lives of ordinary people where, even if you start out being half-decent, you are soon corrupted. Surely, the way to build a democratic movement is to organise within, and as part of, the local community and local workplaces, with the aim of making immediate improvements to people’s lives. By necessity, this would involve warning people that they must organise themselves rather than putting their trust in the Formbys and Lansmans of this world.

Anyway, must rush; we’ve a table booked at a swanky city centre restaurant in Manchester. Isn’t it just so marvellous that you can now get a decent meal outside of London? We hear that Manchester City Council is hoping to attract some of that Russian mafia money away from London. If they could, that would be such a boost to the local economy, with house prices rising so high no normal human being could possibly afford them. Manchester would then have truly arrived as the heart of the northern powerhouse.

This article was published on 2 April 2018 by the SolFed group in Manchester. Other recent articles: