The Solidarity Federation Education Union (SFEU) is a new initiative, which grows out of the desire for connected struggle and defence of education workers across the board. In our small but growing Union we welcome all workers within the sector, from primary to higher education, and all roles within the industry, from caretakers, classroom assistants, through to teachers. While some of the existing unions can be fairly effective, many workplaces have no real union presence and workers are left to either defend themselves or have "agreements" imposed upon them. Furthermore, traditional British trade unionism tends to replicate rather than challenge divisions of workers along lines of grade, function, degree of precarity, and workplace by prioritising the interests of specific categories at the direct expenses of others.

Using the Southampton Renter's Checklist we have produced a Spanish translation. Please see the attachment

If you are facing redundancy it is important you get organised. You should talk to your co-workers and organise a meeting as soon as possible. If necessary meet outside to ensure social distancing. If your workplace is unionised you should contact your union branch. You should also collect phone numbers and other contact details of your co-workers. It is important that everyone keeps in touch throughout the dispute, so consider setting up a WhatsApp group or something similar. Remember, your employer will try to divide you by getting you to compete for any jobs that may be available. Be positive from the outset, stress the need for unity constantly and focus on the failing of the employer.

Get to know your rights 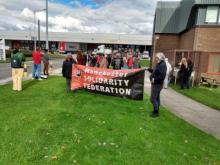 Manchester Solfed supporting the demo against the hostile environment and detention of migrants, organised by Queer Support for Migrants, outside the detention centre at Manchester Airport Yesterday. The action was part of a series of decentralised, local actions taking place last weekend around the country, coordinated around the slogan ‘Solidarity Knows No Borders’

LGBTQ+ people in the UK and across Europe still face discrimination in all aspects of everyday life, according to a survey conducted last month by the European Union Agency for Fundamental Rights (FRA). The survey, the largest of its kind ever conducted, focused on the social experiences of lesbian, gay, bisexual, trans and intersex people in 30 European countries, and found that little progress has been made over the past few years.

The government has announced that social distancing can be reduced from two to one metre but only if measures are in place to mitigate the risk. Examples of measures that can be used to mitigate the risk include, consider if the activity needs to continue, working back to back or side to side, screens being fitted to protect workers, only working together at less than two metres apart for short periods and reducing the number of people each person has contact with.

If your employer is making you work within two metres of another person, with no mitigating measures in place, they are breaking the government guidelines. 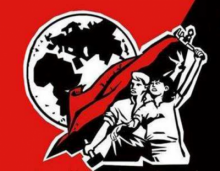 What does it mean to change the world? Where do we start? How do we get masses of people to wake up and rise up? Sometimes it feels impossible. People vote for parties who openly attack their interests. Most of the time only a handful will join protest marches or do anything more militant. The climate is changing, wars are raging the world over, and most people don’t even want to hear about it.

But that isn’t the whole story…

From 1 July onwards the government will be introducing a flexible furlough scheme which will apply to all those who were placed on the existing scheme on or before June 10th.

Under the scheme, employers will be able to bring in workers already on furlough on a part-time basis. It will be up to the employer to decide the hours and shift patterns they want people to work to suit the needs of their business. Your employer will pay your full wages for the time you are in work and the government will pay 80% of your wages for the hours where you are not needed.