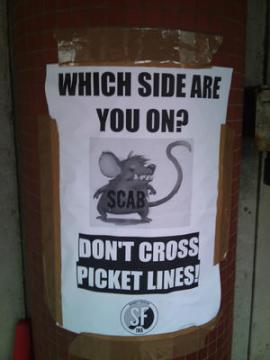 On Saturday 14th May, Liverpool Solidarity Federation - along with members of Anarchist Federation and UK Uncut - held a picket outside a government office in Bootle. This was in support of PCS union members who were facing victimisation for upholding an overtime ban in defence of their jobs.

PCS reps have been on picket lines most Saturdays since before Christmas, reminding people of the ongoing national action. Overtime is being used as a way of masking job cuts, as well as speeding up the current workload so as to meet the "cliff face" at which job cuts can be made faster. 96% of staff in the building, not just union members, support the ban - but a tiny and vocal minority remain determined to stab their colleagues in the back for a quick buck.

Previously, those crossing the picket line have made comments such as "this is a holiday in Thailand for me," and openly boasted in work of spending their money on luxuries such as iPhones. One has even commented that he felt many in his office "deserve to be sacked" because "they treat it like a holiday camp." Things became particularly nasty, however, when scabs began to make a series of vexatious complaints against union reps and members. These have been taken up enthusiastically by management, who have failed to follow their own procedures in a bid to push conduct charges through, whilst incidents such as one rep being verbally abused whilst sat at his desk have been thrown out on the spurious grounds that he provoked it by "looking down the room."

In our supportive picket, Solidarity Federation members made it clear that our solidarity was with the workers in struggle. Scabs leaving the building kept their heads down and scurried away when confronted about their conduct and faced with signs which said "no to scab lies" and asked "which side are you on?"

Liverpool Solidarity Federation unreservedly condemns the vindictive campaign by scabs against pickets, as well as the management support for this harassment. We believe in direct action solidarity, from organising demonstrations, pickets and direct action in support of individual victimised workers to staffing picket lines, raising funds and bringing in supplies. We want to build a culture of solidarity so that when scabs or bosses mess with one of us, they're messing with all of us - an injury to one is an injury to all!

This article was published on 15 May 2011 by the SolFed group in Liverpool. Other recent articles: