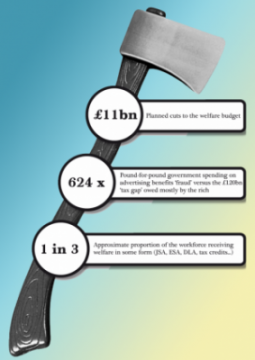 The government’s answer to the problem of unemployment during the biggest economic crisis since the 1930s is not to create any new jobs, but to launch a massive attack on our living standards.

In the emergency budget, one group of people who will be hit the hardest is welfare claimants.
Benefits are not just for the unemployed. They supplement low pay and give those with disabilities or caring responsibilities a means by which to survive, as well as providing income to those who cannot find unemployment. With around 2.5 million people claiming Job Seekers Allowance (JSA), 2.9 million receiving Disability Living Allowance (DLA), around 5 million reeceiving working tax credits and further claimants on other tax credit schemes and Employment and Support Allowance (ESA), more than one-in-three of Britain’s 30 million strong workforce are receiving some form of state welfare.

But welfare also traps people in poverty. Both housing benefit and tax credits, for example, are a massive subsidy to employers and landlords. On the surface they help people on low incomes to afford housing and to keep their household running, but they also allow landlords to charge higher rents and the employers to pay lower wages, both making more profit in the process.

Meanwhile, those claiming the benefits remain on the breadline, and working more in fact leaves them with less money. For example, working more than 16 hours counts as being ‘in work’ for JSA, but you need to work 30 hours to claim Working Tax Credits. Working more can mean earning less as your benefits are reduced faster than your income rises.

In order to get around this, people often turn to the black economy. You don’t pay tax on cash-in-hand jobs and it doesn’t affect your benefits. Hence, there are more people working in domestic service than in Edwardian times, and single parents in particular are amongst those often forced to work “illegally.”

For its part, the state is happy with this situation as it drives down wages overall, keeping the labour market ‘competitive’ and ‘flexible’. It also gives them a stick to beat the poor with; the fact that their policies have forced so many people onto the black economy making their propaganda about benefit “cheats” a much easier sell to those workers who don’t claim welfare.

Indeed, benefits ‘fraud’ accounts for around £3 billion a year, while estimates put the amount of benefits left unclaimed at between £4bn and £8bn. In other words, if all ‘fraud’ stopped, but everyone eligible for benefits received them, the government would be worse off. Dwarfing these figures, the total gap of uncollected taxes, mostly from the wealthy employing methods of tax avoidance and evasion is £120 billion. However, pound-for-pound the government spends 624 times more on adverts demonising ‘benefits cheats’ than rich tax dodgers – a sure sign that their priority is propaganda and not a genuine desire to balance the books.

This is the context of the so-called ‘welfare reforms’, which are aimed at making the unemployed, single parents, the sick and the disabled compete for scarce and badly paid jobs on the labour market, in order to push a ‘flexible’, insecure, low-wage economy. This regime is not in the interest of those who are in work. At a time when employers, under the pressure of the crisis are attempting to make us work harder for less money, these ‘welfare reforms’ aim to force those who don’t have a job to accept even worse wages and conditions.

The emergency budget outlines plans to cut £11 billion from the welfare budget. One big cut comes from linking all benefits apart from the state pension to the Consumer Prices Index (CPI) measure of inflation rather than the Retail Prices Index (RPI) one. CPI is typically lower as it excludes housing costs. Over the past 20 years it has been higher than the RPI on just three occasions. The August CPI is 3.4% while the RPI is 5.1%.

There is also an increasing drive to turn welfare into workfare (see ‘hello workfare’ bellow), where private companies pocket public cash to link benefits to compulsory work placements. For a standard 40-hour week this can mean working for just £1.60,/hour less than a third of the minimum wage. This doesn’t create jobs, it just undermines the wages of those still in work.

The criteria for ‘the sick’, Employment and Support Allowance or ESA, are also being tightened up (see below). This has already led to tragedy, with one person in Scotland suffering from severe depression committing suicide after being forced back to work. Tax Credits for middle-income families will also be cut back, deepening the poverty trap as low income workers who do manage to earn more will simply have it taken away again through reduced tax credits.

The upshot is that the situation for claimants looks bleak. However, they are not all taking it lying down. The ‘no to welfare abolition’ network (defendwelfare.org) is “a grassroots network to extend and defend welfare rights”, incorporating local claimants groups who have been picketing agencies involved in the Flexible New Deal as well as offering support to striking job centre workers. Claimants, like the wider working class certainly have a fight on their hands to defend their living standards.

Employment and Support Allowance (ESA) is the sickness benefit introduced in October 2008, which will eventually replace Incapacity Benefit. Its new test is extremely difficult to pass and almost nobody is exempted from the test.

A serious problem for sickness claimants today is that their medical assessment is made through the use of a computer program, the ‘Logic Integrated Medical Assessment’ (LiMA). This programme was introduced by DWP’s contractor Atos Origin in 2005 to assess claimants for the old sickness benefit (Incapacity Benefit). Already in December 2005, advice charity Child Poverty Action Group complained of serious problems with Atos’s computer-aided medical assessments in an article entitled ‘The computer says no’.

During the examination, the doctor asks the claimant a list of questions, which the computer shows on the screen. While the claimant speaks, the doctor builds, through the use of a windows system and drop-down menus, a combination of words and numbers which resembles what the claimant says.

The result is an often surreal computer-generated ‘Medical Report’, based on a collection of mechanically-constructed brief sentences. More than one Social Security judge has noticed with alarm that automated reports did not reflect what the claimants had actually said and contained ‘nonsensical statements’.

Furthermore, the handbook for Atos’s doctors tells them to apply the harshest possible interpretation to the test. For example, the handbook says that if a claimant’s memory is not so bad that he forgets to get dressed in the morning, he cannot really score anything at all for memory problems.

Many sick people, although unable to work, do wish to attend courses, and they don’t because they are afraid of losing their benefit. Any mention of having done any activity whatsoever will be used to disqualify a claimant from his sickness benefit. An extreme example from the Citizens Advice Bureau: a claimant was found ‘fit to work’ because he attended a compulsory ‘Work Focused Interview’! The automated medical report said: ‘the client is actively seeking work through Jobcentre Plus’ .

The ‘Brighton Benefits Campaign’ has been fighting for claimants and low waged workers since the recession began. They say that “a fight for a more humane medical assessment is also a fight for the abolition of Atos’ mechanised methods – for the dismissal of Atos and the return to a professional medical service, publicly run, and run not for profits.” The antagonism between private profit and claimants’ needs only looks set to deepen as the welfare cuts begin to bite.

One of the latest reforms is the introduction of the ‘Flexible New Deal’, which began in October 2009. The year-long scheme is not run directly by the government, but is contracted out to a number of private companies who stand to receive millions in public money to bully the unemployed into accepting any job at rock bottom wages. This won’t create any new jobs – it will just force the unemployed to compete desperately with each other for the few jobs that are available. The effect of this on the labour market will be to push down wages and reduce job security even further.

After six months on the FND claimants are forced to work for their benefits (workfare) for one month: 40 hours work a week for 4 weeks in order to receive a meagre £64.30 a week (or even less for couples or the under 25s). Even for those on the ‘higher’ rate, this is just £1.60 an hour! The scheme benefits employers and nobody else. Why take on workers at minimum wage or higher when you can get them at £1.60 an hour? Those who lose their jobs due to the recession may one day find themselves forced to work their old job for benefit levels. This will only exacerbate the ‘race to the bottom’ in wages and conditions which is fast becoming the norm in the ‘modern economy’.