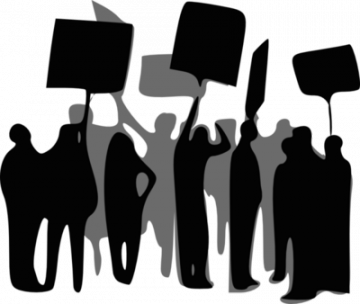 On Thursday 14 July, a meeting held in Unite's regional office saw the establishment of Liverpool Against The Cuts. 85 people, including members of Liverpool Solidarity Federation, were in attendance.

It was positive to see that some of the points about open, democratic organising that Liverpool Solfed had previously made about were in practice. In particular, that the two key documents at the heart of Liverpool Against The Cuts - the policy statement and the structure - were presented as initial drafts, open to amendments from the floor. Even more heartening was that there was very little in it that needed to be revised.

The discussion consisted of concrete proposals and keen discussion on how we link up different campaigns and disputes. It could be argued that those present tried to cover far too much ground in one go, but this is understandable given how new the organisation is. Nonetheless, with a number of organisations already affiliated and the potential for considerable growth, Liverpool Against The Cuts appears to be off to a good start.

The only real matter of dispute in the meeting came when structure was debated. On the whole, it was agreeable: monthly mass meetings would serve as the sovereign decision-making body of the group, whilst a steering committee comprised of delegates from each community organisation, political organisation, and trade union branch would be responsible for the administration.

However, as part of the proposed structure, the steering committee also contained the entire Liverpool Trades Council executive. A Liverpool Solfed moved to amend this, arguing that the Trades Council should have one delegate as every other organisation. Although they had set the meeting in motion, the whole point of the group was that it was an independent organisation established to coordinate anti-cuts activity, of which the Trades Council was just one element. By having their full executive at the centre, and thus leaving them with the chair and secretarial role, Liverpool Against The Cuts becomes simply Liverpool Trades Council with bits tacked on. That should not be the case.

This provoked heated debate, with some people arguing that having the Trades Council at the centre provided "structure" and "focus," whilst comrades from the Anarchist Federation and UK Uncut backed Solfed's position that such already existed and giving one affiliate greater prominence within the campaign was wrong.

Disappointingly, the amendment fell at the vote. However, this doesn't mean that the matter is dead, and there is still plenty of scope for positive activity. Barring that one disagreement Liverpool Against The Cuts' structure is open, democratic and broad-based. If the attendance yesterday is anything to go by, it is also one that is beginning to pull in those beyond the professional left. The next meeting will be on Thursday 18th August, and there is plenty of activity in the interim, so we shall soon know the direction that the campaign is heading.

This article was published on 14 July 2011 by the SolFed group in Liverpool. Other recent articles: