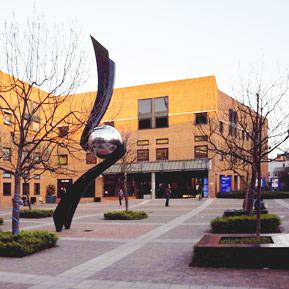 Over the summer Queen Mary University  (QMUL) library workers have been organising in defence of jobs and services, in reponse to restructuring plans that will see a loss of 26 out of 82 jobs.
The majority of the affected workers are part-time and the nature of the workplace means that they are also term-time only workers. Management release the plans in July.  This meant the majority of the affected staff were on leave, a clear act of discrimination against part-timers and those with child care commitments. University bosses clearly designed this to prevent workers from effectively responding, resisting and seeking solidarity from the students, who were also off campus.
In spite of this,  library workers have been meeting weekly all summer and have organised a collective response to the proposals. Collective letters have been written and formal grievances have been raised. The workers have pursued all official channels of grievance but have been continuously disregarded and disrespected by university bosses.So on August 25th, Library Staff held an indicative strike ballot over the timing of its consultation period, which was passed.
A significant amount of workers have had no option but to take voluntary redundancy and the loss of the experienced and knowledgeable workers has serious and far-reaching affects on the students and their learning, as well as those workers left at the library. The library are among 6 departments at the university that are facing serious cuts to jobs. Over 100 redundancies are planned this year across campus.
QMUL is a financially stable University that last year made £10 million in profit and has opted to to charge students £9,000 for tuition while at the same time cutting services. Over the last two years, vice-chancellors have awarded themselves average pay rises of 20.6%.
This year alone, QMUL’s principal, Simon Gaskell, took a payrise of 18%, including a free flat worth £39,000 a year, bringing his package to £280,000. Furthermore, 95 staff at QMUL are paid over £100,000; this includes 24 over £150,000; and six over £200,000. Low-wage employees who actually keep the university going, are being sacrificed to prop up these salaries.
Library workers are pushing for their union, UNISON, to approve a campus-wide ballot to strike in defense of jobs at Queen Mary as soon as possible. North London Solidarity Federation have been supporting this struggle and spent freshers week leafletting the campus and speaking to students and other workers, raising awareness about the cuts at Queen Mary, the impact they will have and how we can effectively resist.

I’ve been working as an English teacher in Further Education (FE) on an hourly paid contract on and off since 2003. In my workplace, 60 out or 230 of us are hourly paid.  Those who are unlucky enough to be hourly paid, including me, are on a zero hours contract with no minimum of guaranteed hours.  We get paid about 65% of what we would get if we were permanent staff on the lowest grade, but we don’t move up the pay scale as we get more experience, so we stay on that pay rate indefinitely.
Hourly paid staff (HPLs) are quite a varied group of people. Some of us have a “real” career in the daytime and are only teaching short term or just in the evenings, but many of us stay stuck on that same pay grade for years even if it is our only source of income. Permanent posts are only advertised occasionally and you have to compete against your co-workers. Women and black staff are more concentrated in the hourly paid grade and they tend to teach the more unpopular classes.
Apart from pay, the biggest problem is insecurity.  We get timetabled after the permanent staff—which in the past was predominantly a problem of receiving annoying timetables.  We also get more part-time classes, which are a lot more hassle.  The risk of our hours being cut without notice always hangs over our head.  There used to be plenty of work, if you were prepared to do lots of cover and work any hours at short notice.  However,  with the cuts in FE some of us are losing up to 90-100% of our hours.
Normally when HPLs lose their hours or even their jobs it doesn’t become a union issue. Management don’t consult with the union or follow the redundancy procedures. Most HPLs don’t join the union (there are ten union members out of sixty HPLs in my workplace) and a lot of them cross picket lines in strikes (although a lot also refuse to cross). Partly because of this, there is a tendency in the union to see the hourly paid staff as disposable.
However, it looks like this might be changing. For the last year or so some of the union reps have been pushing the issue of hourly paid contracts in negotiations. A lot of the permanent staff spent years in the same boat before they got a permanent job and are sympathetic.  Recently we had a big struggle against redundancies amongst the permanent staff. Some of the hourly paid staff were active in the struggle and took part in direct action with everyone else. Currently the union and the organised permanent staff do look like they are prepared to take the issues of the hourly paid staff seriously and they might be prepared to take solidarity action.
Organising around the hourly paid staff presents lots of difficulties. People are scattered around the college and are more likely to work evenings and off-site. If they have other jobs somewhere else they don’t hang around the college so it is a lot more difficult to speak to them. People are afraid of victimisation.
More fundamentally, a lot of people do not feel engaged in the struggles over pay, pensions or redundancies that go on in the college. There is a degree of separation from the struggles of the permanent staff, but at the same time the HPLs don’t work together as a block and usually don’t know any other hourly paid staff except in their own department. This dispersal makes it more difficult to come together and talk about our needs and demands.
If we don’t learn to  organise with casualised workers we don’t stand a chance of resisting austerity, never mind changing the world. Outside FE colleges there is a submerged world of training providers, jobcentre courses and private sector language schools where my union doesn’t even try to organise. If the permanent staff are prepared to accept bad treatment for casualised staff as a buffer for their own jobs and conditions, and casualised staff don’t take responsibility for coming together and fighting for their conditions, and then demanding solidarity on that basis, then our management can basically do what they want. So both sides of the divide have to see beyond their own narrow interests and be prepared to stand up for each other.

2011 has seen the popularisation of the NEET (Not in Education, Employment or Training) term as a social category for young people.  Perhaps 2012 will see a new term join it, that of the PEP (Professional, Educated and Precarious).  For the last year or so, I’ve been trying my luck as an English as a Foreign Language teacher (or TEFL) in London.  I’m a young, precarious university graduate, lost in a generation-wide swamp of casualisation; flitting between one McJob and another (often simultaneously), absent-mindedly muttering about going abroad or changing career. We all see TEFL as a ‘stopgap’, a means of paying the rent while you prepare for your dream job of acting, writing, academia, etc. ‘Who cares? I’m outta here soon,’ can constantly be heard echoing around my school’s narrow corridors.

Like many of my colleagues, I dart from one college to another, doing complex calculations on Transport for London Journey Planner as to whether I can cover this class in Stratford before going to that one in Wimbledon.  I?ve got into the habit of marking and preparing classes on the Tube, since we only get paid for the literal hours that we spend in the classroom with the students.  I usually try to insist that my Director of Studies (kind of like the teachers’ line manager) gives me a contract (he or she will tend to ‘suggest’ that I register as self-employed  - denying me paid holiday and sick leave - ‘for tax purposes’) but even that only guarantees me work until term’s end (a maximum of 12 weeks), and any extra classes I suddenly get offered further down the line aren’t included; rather, they’re seen as ‘overtime’.
However, perhaps I should consider myself lucky, because at least I have something.  New Home Office legislation came into force in April 2011, essentially prohibiting non-EU nationals from coming to the UK on a student visa without already possessing an intermediate (i.e. passable) level of English, and even then they have to pass an examination proving that their English has progressed in order to get a visa renewal.  On top of that, non-EU students are, in theory, barred from working more than 10 hours/week in the UK (although in practice this forces many students to find unofficial work - I had one Thai student who was earning £3.80/hour in a restaurant with three Michelin stars!).
In response to the government legislation and the global recession, my college projected a 50% drop in student intake, and started relieving teachers accordingly.  I spent two months as a highly precarious cover teacher, pondering whether it would be worth my while to ‘try something else’ or sign on, all the while nervously checking my phone, on which I depended on for early morning round robin texts offering work.  I missed out on hours due to being in the shower, in another room to my phone, or even asleep (leading to me adopting the habit of setting a 7am alarm to check my phone).
One day, I finally managed to be the first to whirr my fingers across my keypad and thereby pick myself up three days of work.  On my first day back, I overheard my boss commenting that he was going to open another class, and I interrupted him to volunteer my services, landing myself three more weeks in the process - but no contract or guarantee of further work.  ‘The only thing worse than working,’ I mutter to myself on the tedious daily Tube journeys across London which cost me the equivalent of an hour-long class, ‘is not working.’