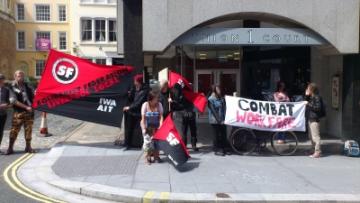 The picket was, by the standard of recent actions against workfare, remarkably brief. As A4e was on an upper floor of a building with multiple tenants, any form of occupation was unviable. However, we did have an extremely visible presence outside the front doors, distributing Boycott Workfare leaflets (PDF) to the public and Solfed workfare pamphlets to claimants who had been referred to the company.

We had a number of conversations with claimants who shared their experiences of A4e with us, as well as with members of the public who wanted to know what was going on and were generally supportive.

The only opposition came from the owner of the building. When we arrived, a security guard told us we had to remain on the public highway. He tried to get us to move from right in front of the building, but we declined this request. For most of the afternoon, our picket passed without incident - but at every miniscule slip over the imaginary line where the land became "private property," either the guard or the owner would come out yelling. They even harassed a parent at the picket whenever her toddler wandered the wrong way!

Despite this, the day was succesful and we ended the brief picket knowing we had made an impact. But not as much of an impact as the communications blockade had. From playing music down the phone and pretending to order a pizza, to giving the staff an earful about their involvement in the work programme, opponents of workfare kept the lines tied up. So much so that desperate staff tried to re-direct people to a centralised contact centre number. Meanwhile, using a free internet fax service, supporters were able to waste the companies ink on complaint letters, random gibberish and even full length novels!

Everyone who got involved today has helped to make an impact on A4e, and the task now is to keep the pressure up. We will be returning to the Liverpool office soon enough, but this Thursday our target is Bootle - see here for details of the communications blockade. Not to mention that our Saturday direct action will continue, with Wavertree the target this week.

The fight against workfare is one we can win, if we fight hard and maintain focus. Get in touch with Liverpool Solfed if you want to be a part of what we're doing.

This article was published on 12 June 2012 by the SolFed group in Liverpool. Other recent articles: