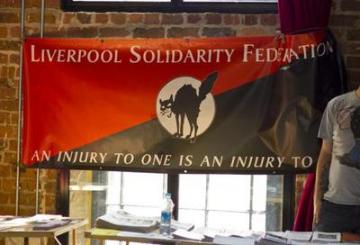 Another positive was the opportunity to build up local links and to promote an anarcho-syndicalist approach to current struggles. Our new Workmates pamphlet, about rank-and-file organising on the London Underground, sold extremely well and another SolFed comrade was able to offer greetings and solidarity from the Cheshire West Against The Cuts campaign in which they are active.

The more disappointing aspect of the event was that nothing concrete came out of it. Many people, Liverpool SolFed included, attended with the impression that the event was aimed at establishing an all-Liverpool anti-cuts campaign. Certainly, it was the perfect setting for it, and that the final item onthe agenda was titled "where next: a proposal from Liverpool Trades Council" implied it. But no such thing emerged, and as time for the event ran out we were informed that the trades council could agree no such thing as it had not consulted its affiliates. This provoked much uproar and heated debate at the very end of the day.

Addressing the meeting before it closed, one of our members said: "Liverpool Solidarity Federation were also of the impression that setting up such a campaign was the whole point of today. We have drafted a concrete set of proposals on how we think it should function - if you don't have one already, we'll be happy to provide.

"But if the Trades Council aren't yet ready to create such a campaign, we're more than happy to initiate it along with any group that is. This shouldn't wait. If your organisation agrees with our proposals, get in touch so that we can get the ball rolling."

We reiterate that point now. We urge people to put what we are proposing to a vote in their union branch, community campaign or other organisation. It is long past time that we had a broad-based anti-cuts campaign in Liverpool, and more importantly based on democracy and open participation. So let's get one going!

A copy of the proposal is attached at the bottom of this post.

This article was published on 4 June 2011 by the SolFed group in Liverpool. Other recent articles: