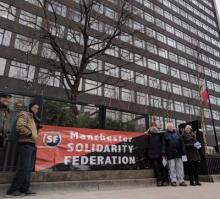 On December 19, the pharmaceuticals company Roche Poland dismissed an activist of the anarcho-syndicalist ZSP without any reason. The orders came directly from corporate headquarters and he was asked to leave immediately. The company refused to give any reason in writing or any other documents.

The dismissal came one day after a large article with the comrade appeared in the main newspaper. Although no real reason was given, it is largely felt that this decision was related to his work in the union.

Around 400 workers had been striking over the issues of contracts, bonuses and a pay rise. Company officials went to confront strikers and opened fire with 4-5 shots, wounding a worker. Workers then fought with officials leaving several injured on both sides and the shooter dead.

Sources close to the workers claim that many of the so-called ‘management’ are in fact company goons hired to break the union, and that beatings of workers have become commonplace. Reportedly it was also “quite common for them to roam inside the factory openly carrying the guns in order to terrorise the workers.”