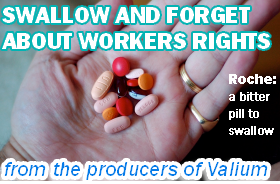 On December 19, the pharmaceuticals company Roche Poland dismissed an activist of the anarcho-syndicalist ZSP without any reason. The orders came directly from corporate headquarters and he was asked to leave immediately. The company refused to give any reason in writing or any other documents.

The dismissal came one day after a large article with the comrade appeared in the main newspaper. Although no real reason was given, it is largely felt that this decision was related to his work in the union.

Our friend is fighting for his reinstatement, but not only that. He is also fighting for the recognition of his status as employee and all benefits owed to him. Because in Poland, work without a proper contract is a normal policy of Roche. In fact, the worker, who was trying to establish his legal working relationship with the company, was told that he would be the last person ever employed on a contract.

Roche has many workers on temporary contracts but also a large number of irregularily employed staff that are ficticiously self-employed. The employees should start a business and bill Roche through an intermediary company; this is in order to avoid paying them what they should according to the law: paid vacation, sick days, paid maternity and paternity leave, social security benefits and severance pay are what a big part of Roche workers are being denied by the pharmaceutical giant.

At the same time, in 2010-2011, Roche received large subsidies from the Polish government in order to “create jobs”.

The ZSP announced that it will fight for the comrade's reinstatement and the recognition of his employment status, as well as inform every member of staff and the wider public of their rights. Although this is a huge problem in Poland, labour organisations fail to deal with the fake self-employed or illegally assigned and they are discriminated against in many ways legally.

Poland now leads the EU in the number of workers employed on “trash contracts” and the percentage of employment through temp agencies grew by nearly 40% in 2011. For workers under 30, fewer than 20% can be said to be normally employed. However none of these statistics even include the fictitious self-employed, who are simply “businesses”. It is estimated that Poland also has the highest number of “business people” in Europe.