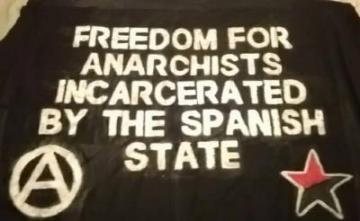 17 searches have been carried out by police, during which another 14 people were arrested for resistance.

Agents with the General Commissary of Information of the Policia Nacional, in collaboration with the Information Brigades in Madrid, Barcelona, Palencia, and Granada, carried out at 6:00 in the morning, an operation resulting in the arrests of 12 people.

17 raids were carried out in total, six of them in Occupied Social Centers [CSOs], where some of those detained engaged in resistance. During the course of the raids another fourteen people were arrested for the felony of resistance.

Those arrested [the original 12] belong to the Coordinated Anarchist Groups [Grupos Anarquistas Coordinados, GAC]. They have been accused of membership in a criminal organization with terrorist objectives, and of committing felonies relating to sabotage and the placing of explosive and incendiary artifacts.

The operation is the fruit of the investigations carried out in the Central Court of Instruction no.6 of the Audiencia Nacional.