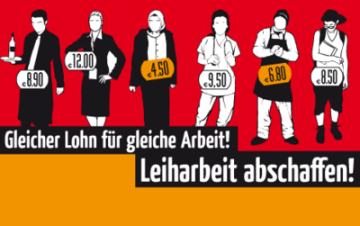 Since social-democrat and green politicians broke down all restrictions on temporary employment in 2003, the number of people paid by temporary work agencies in Germany increased from 300.000 to 900.000 in 2010. Many of them have been forced by legal employment agencies to offer themselves to these "slave-traders". Temporary workers earn 30% less than their colleagues. Collective labour agreements, as those which have been negotiated by the Christian unions umbrella association for temporary work and personnel-service-agencies CGZP (Tarifgemeinschaft Christlicher Gewerkschaften für Zeitarbeit und Personalserviceagenturen) are crucially responsible for that. Now, the federal German labour court (BAG) rendered CGZP's labour agreements ineffective. No labour contract signed by the CGZP unions is valid any longer.

Each contract signed between CGZP unions and employer's organizations, such as AMP (Arbeitgeberverband Mittelständischer Personaldienstleister) or BDV (Bundesverband Deutscher Dienstleistungsunternehmen e.V.), are generally ineffective now. All temporary workers, who have been paid by CGZP contracts so far, have a legitimate claim to receive the money lost by these contracts over the last three years. They can also legitimately claim for all bonuses and extra pays which have been paid to their colleges as there is a German labour law which prohibits different treatments of worker's in the same company.

Lower courts in Berlin and Berlin-Brandenburg have already neutralized CGZP contracts. CGZP's appeal on a point of law that followed has now been turned away by Germany's federal court. In an official press release, the court justifies its decision by arguing that labour contracts can only be negotiated by a union which has the legitimate ability to do so. Due to several criteria, the CGZP has not.

When ineffective CGZP labour contracts have been used, each temporary worker needs to be back paid for the time he worked under these conditions. He needs not be treated different from other workers. According to German labour law on the transfer of personnel (AÜG) §10 (4), workers can now demand repayment from the temporary work agency they work for. The sum is adjusted on comparable employees working for the company which lent the temporary worker.

As each CGZP contract has been rendered ineffective, each limitation period is ineffective too. Conclusively workers can demand repayment for the last three years. Temporary workers should immediately check their contracts for links to CGZP labour agreements and lodge an action if necessary.

Since January 01, 2010 there exist other fake-unions like the CGZP. The CGM, DHV and GÖD did also sign labour agreements for temporary work. If these agreements are affected by the court's actual decision remains unknown so far. Their contracts remain probably untouched by the decision.

The federal German labour court's decision on CGZP labour agreements does not affect members of the DGB. This year, the union renewed its labour agreements guaranteeing dumping wages. So there is no reason for the DGB unions and its bureaucrats to applaud the actual judicial decision. After the renewing of its labour agreements, DGB cannot put pressure on the temporary work industry for “equal pay” and “equal treatment”. Their labour agreements are valid for the rest of time. Now DGB claims minimum wages for temporary workers, trying to compensate their own mistakes. But legally enacted minimum wages for temporary workers will always undercut wages and conditions of regularly employed workers. This is the opposite of equal pay. It is just another name for mass discrimination.

The FAU unions say: commercial "slave-trading" is a crime and temporary work needs to be abolished now.
For more information see (German): www.leiharbeit-abschaffen.de