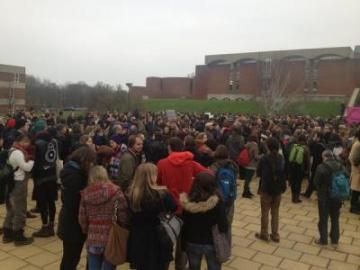 The long-running struggle against the outsourcing of 235 jobs at the University of Sussex has been gathering momentum. The plans were first announced in May 2012, prompting demonstrations and mass meetings by staff and student supporters.

When students stormed the Bramber House conference centre on Thursday 7th February, it probably wasn't that out of the ordinary, given Sussex's traditions of student activism. Management brought in private security to seal off the entrances (the in-house security are among those being outsourced), and turned off the heating. Students were forced to winch food and water in from a third floor balcony, and spend the nights in near-freezing temperatures.

Having surprised everyone by holding the building over the weekend, a mass demonstration the following week surged and overwhelmed security, reinforcing the occupation with a hundred or more fresh faces. Management soon conceded open access during the day, and the occupation was firmly established - and heaters acquired to warm the space. While management seem to be hoping things would run out of steam, occupiers have organised a program of talks and discussions to keep the space busy and active.

Speakers have included a range of leftist notables from Caroline Lucas MP, Mark Steel, Owen Jones and Laurie Penny, with a Skype appearance from Noam Chomsky promised. But this is only the public, visible side of the occupation. Behind the scenes, a huge amount of less visible organising is going on. While inherently less public, this organising is of far greater significance to the success or failure of the anti-privatisation fight.

Workers' involvement hasn't been completely invisible. On a recent demonstration, for the first time staff outnumbered students. A few months back, when students hung a banner from the roof of management's offices, estates staff, who are facing outsourcing, refused to remove it. During the Bramber House occupation, while the Vice-Chancellor claimed staff opposed the students, his divide-and-rule ploy was emphatically refuted by a flood of supplies from Bramber House catering staff, whose jobs are also facing privatisation. These examples are only the tip of the iceberg of student-worker solidarity.

The trade union response has been mixed, but Unison, the main union for the affected staff, has been less than inspiring. Their main tactic has been to commission an alternative business plan, which management have simply ignored. The question for 'the 235' facing outsourcing, and the other campus staff in ITS, the library, and the sports centre who fear they're next, is whether workers can organise amongst themselves on a horizontal basis, and like the students, take collective direct action to disrupt the drive to privatise and to put off prospective bidders.