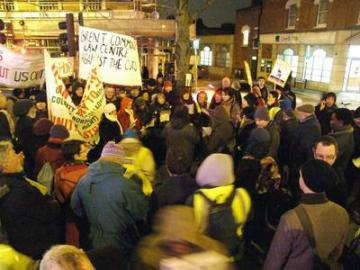 Feb 28th saw about 200 activists and militants gather outside Brent Town Hall to voice their anger at Brent councillors’ imminent decision to cut public spending in the borough even further. Called by the local trades council, the protest began with public speakers discussing the implications of the coming attack -- including the severe cuts to Brent Law Centre, support for the disabled, housing, and the closure of libraries.

The protesters mainly consisted of SWPs, 'old' Labour types, Communist Party members, Green Party activists, and a small number of anarchists. This unfortunately set the tone as criticising Labour for "doing the Tories' bidding" -- however one protester's voice was heard to shout "fuck Labour!" in response.

Although fifty members of the public were allowed to sit in on the meeting, it was apparent that the vast majority of protesters present would not be 'invited' in to the publicly owned building. Protesters were told that they needed to get tickets to enter. However, tickets could only be attained from inside the Town Hall.

Despite this, when the opportunity arose, protesters lifted up the security gates and stormed the front door. When protesters failed to access the building this way, a break was made for the library attached to the hall.  A group broke their way into the council chambers, began banging loudly on the glass surrounding the meeting room, and generally caused a ruckus.  One protester was roughly handled by the security guards on hand, but quickly 'de-arrested' by militants in the crowd. From there, a police presence kept demonstrators outside of the chambers, far enough away not to cause too much disturbance to councillors, but rowdy chants and unfriendly banter with the cops kept the disruption up.  While inside, protestors were heartened to hear that in the neighbouring borough of Camden, a Council meeting being held at the same time was fully shut down due to protest activity.

North London SolFed has no faith that any party, any councillors, or any amount or lobbying can save us from the cuts.  Nor do we subscribe to the fig leaf of ‘public participation’ by allowing individuals to attend Council meetings.  However, we are glad to see direct action being used to put pressure on government.  Only by 'Making the Country Ungovernable' through solidarity and disruption will we be able to beat back the cuts.

This article was published on 1 March 2011 by the SolFed group in North London. Other recent articles: