Brighton Solidarity Federation Hospitality Workers have successfully concluded a campaign against a hotel in Brighton. Brighton SolFed had been working with a former employee for payment of unpaid holiday pay, as well as compensation for dangerous working conditions which have had a serious impact on this worker’s health.

The worker was only contracted to work 20 hours a week, but was regularly pressured to work up to 40 hours, doing work that went far beyond their job description. In addition to his usual duties of taking care of linen and rubbish, he was given sole responsibility in evenings for the duties of a room attendant and dealing with all the requests made by guests, acting as luggage porter, cleaner of bar and brasserie toilets, and responsible for dealing with dirty clothes in the kitchen.

The dry cleaners, based in the Kemptown area, had been withholding holiday pay of over £1000 from a migrant worker. Despite the worker asking repeatedly for their owed money, the bosses ignored and demeaned them.

The worker came to Brighton Solfed, and we started the process of demanding the owed holiday wages. The management tried their best to scam us too, claiming that you can’t accrue holiday pay during a probation period, and claiming compensation for damaged clothing. We explained to the boss that not only are they completely wrong about these things, they were also flagrantly flouting employment law by withholding holiday and demanding compensation.

Below is the write-up of a successful campaign organised by a tenant and Brighton SolFed against a deduction to that tenant's deposit. The three month public campaign concluded in April 2018 with a £450 payment to the tenant, who had had £390 deducted from her deposit. Please note that the article contains brief discussion of post traumatic stress disorder.

A Brighton hospitality worker supported by SolFed has won a victory against the exploitative conditions prevalent in the local hospitality sector, as a restaurant paid £1,200 in response to pay demands made by the worker.

The public campaign in support of the worker ended after a single picket - and some back-and-forth emailing - with the worker receiving all the money she had asked for.

The worker's demand of £1200 was in relation to outstanding pay. Unusually, the worker had been told she would be paid a set weekly amount, depending on whether she worked 5 or 6 days. Her contract stipulated that she was employed and paid for 32 hours a week. However, since work days usually lasted around 11 hours, in reality she worked close to double what she had been contracted for. 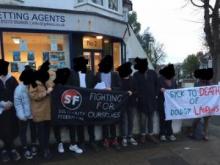 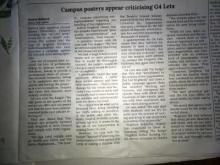 This week's Badger - the student newspaper at Sussex university - reported on our campaign against the G4 Lets. The agency - who specialise in renting to students made a group of students live in squalid conditions, the responsibility for which the local council’s Environmental Health Report placed firmly on the shoulders of the lettings agents. The tenants had to live in mice-infested, unsafe accommodation for a year, and then had £2000 illegitimately deducted from their deposit for these costs. Here we reproduce the full account written by one of the tenants, as well as our response to claims G4 Lets make in the article. 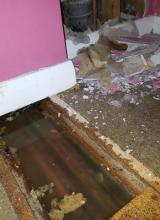 As the public campaign continues to grow, Brighton Solfed are being contacted by other local people who have had similar experiences of the mismanagement of properties by Youngs. In one instance, there were distressing and disruptive consequences for the everyday lives of a couple and their son.
A family living in Kemptown had to suffer raw sewage flowing through their home after unidentified damage to a pipe from flats above - and Youngs failed to investigate the damage until after that their floorboards were sodden and underfloor troughs were filled with dirty water.