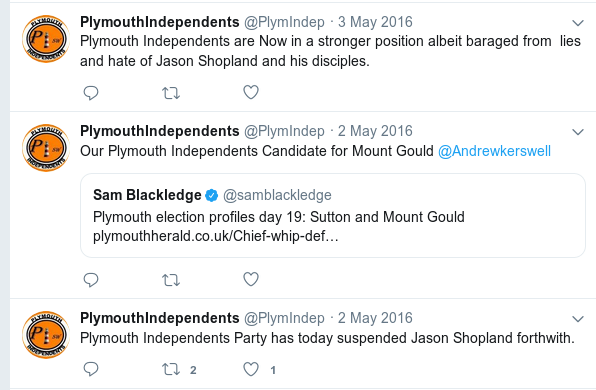 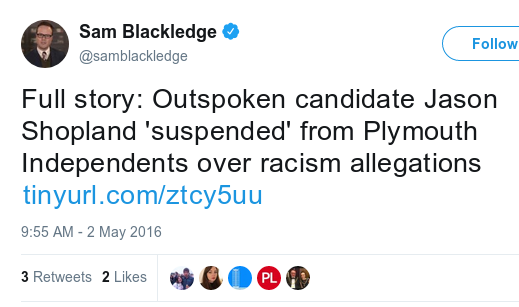 He's now set up his own party "Active for Plymouth", which he's the chairman of. That hasn't stopped him spreading conspiracy theories about the recent terrorist attack in New Zealand. Before they had even finished counting the bodies he was putting out this shite: 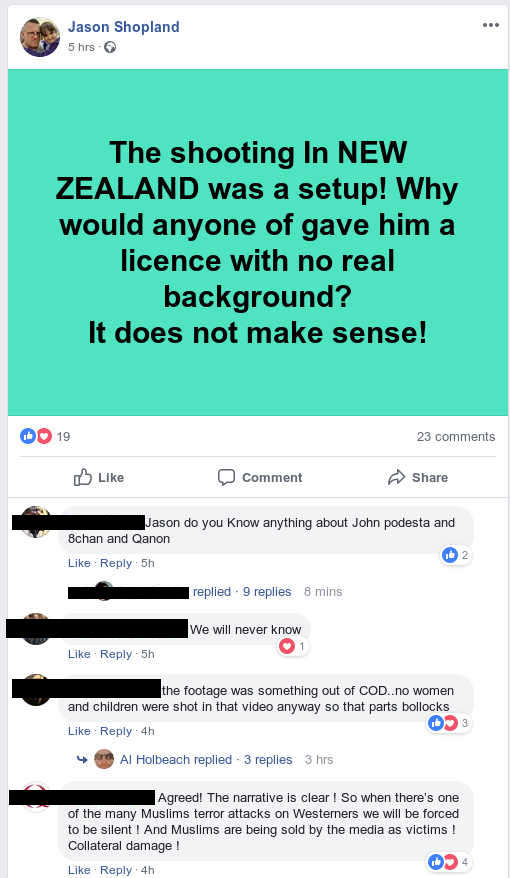 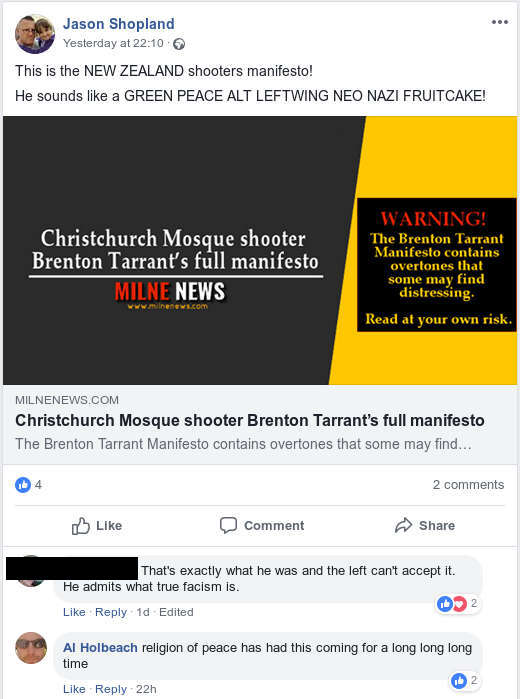 Spouting gross and disrespectful conspiracy theories about a terrorist attack, while his friend says they "had it coming" - this is a disgusting and irresponsible reaction to terrorism.

Since far-right terrorism is a huge threat [1] we all have a responsibility to push back against it. None more so than those on the same side of the political spectrum, moderate or no. From the Muslims of the world we have seen huge marches against terrorism, and countless fatwas condemning it as clear as day. Yet the response from the right to terrorism in their own ranks has been lackluster at best. Could it be there is really a lot of support for it lurking underneath? 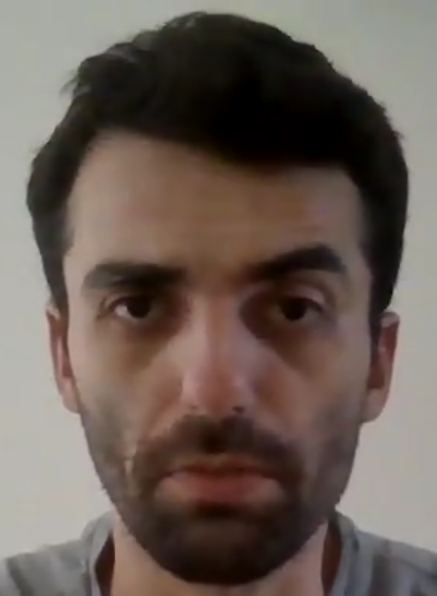 Iuliu Jules Popescu is secretary of Active for Plymouth and standing for election on their ticket. He ran for election under “For Britain” last May. [2] While his election campaign has only put out a few videos, one of them is already pretty shocking. In "My opinion on Free movement versus immigration control", he said:

"Every time Gypsies with Romanian passports come over and do their thing -  which is mostly rob, steal, or scam someone like we've seen in the Herald a few hours ago - the media will say a group of Romanians did this or that. Now I'd much rather they didn't come to Britain at all because that would be much better for everyone wouldn't it?" - from facebook video https://www.facebook.com/julesplymouth/videos/2177334985918890/

In UK law Gypsies are a racial group, so legally this may be hate speech. [3] The far right have always hated Gypsies and travelling people, and the persecution continues to this day. Neo-nazi’s in Ukraine recently burnt a Roma camp to the ground. [4] Only this month far right goons drove Roma families out of a town in Italy. [5] That’s the background to Popescu’s words.

We see this prejudice again in Shopland’s letter to the council about travellers. “many of us have kids” - what does that mean, does he think travelling people are all child snatchers??

This attitude is also written into their official policy:

There aren't enough legal sites for travelling people to go to. [6] So what this policy will really mean is hounding people from place to place for no reason. Hate speech and hateful policy. Is this who we want representing our city?

For Plymouth or “For Britain”?

He tried to organise a meeting for her in Plymouth, which didn’t go to plan. When the venue found out what the meeting was about they cancelled and wanted nothing to do with it.

(post author is one of Jason’s accounts – using a Corbyn picture since he got trouble from facebook...) 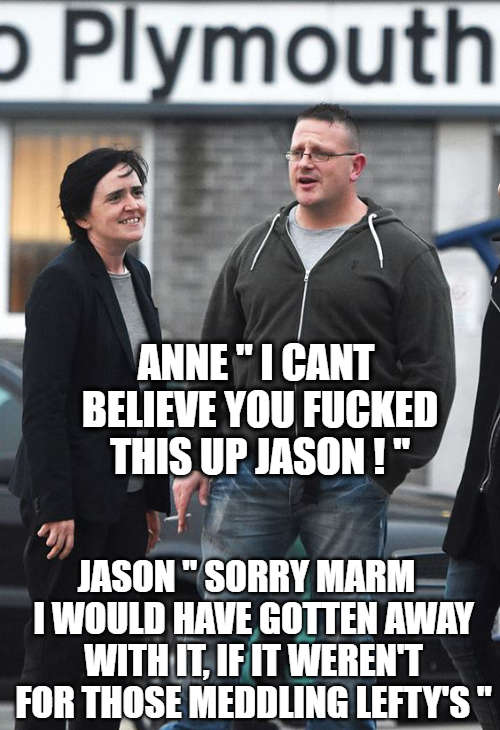 It seems Jason realised that Plymouth, one of the most bombed cities during the Nazi blitz, could never support an obviously far-right party. So he formed "Active For Plymouth" shortly after. The link is clear in the name so we have to ask, is this just an attempt by a fan of the "For Britain" party to sneak their ideas in by the back door? For Plymouth’s original logo looks a lot like For Britain’s too. All they’ve done is change the colours to green and black!

Anne Marie Waters has a whole documentary about her, and her links to white nationalism  [7]. See also these articles for the truth about her and her party
• http://www.irr.org.uk/news/sharia-watch-uk-and-the-metamorphosis-of-anne-marie-waters/
• https://resistinghate.org/exposing-amd-and-her-white-supremacy/
• https://www.hopenothate.org.uk/2018/06/06/exposed-ex-national-action-bnp-members-active-anne-marie-waters-britain-movement/

Last point on this - For Britain whinges that the “far-right” label is unfair. That’s hypocritical nonsense, just look at how Jason Shopland portrays his political opponents! Compared to this, we go VERY easy on him... 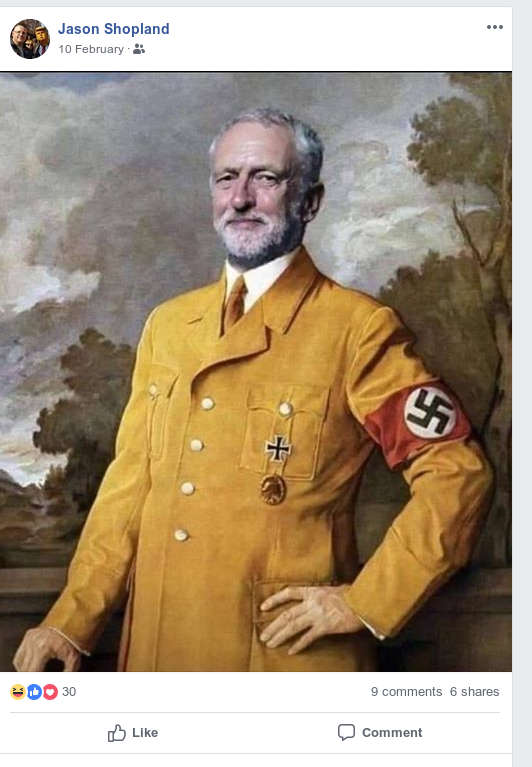 Active For Plymouth has also shown support for other far right figures and causes. Here they are promoting a DFLA march. The DFLA pretends to be a neutral group of people “protesting extremism” but the truth is they have well documented far-right links and members. This article has the details - http://flaf.org.uk/dfla-battens-bootboys/ 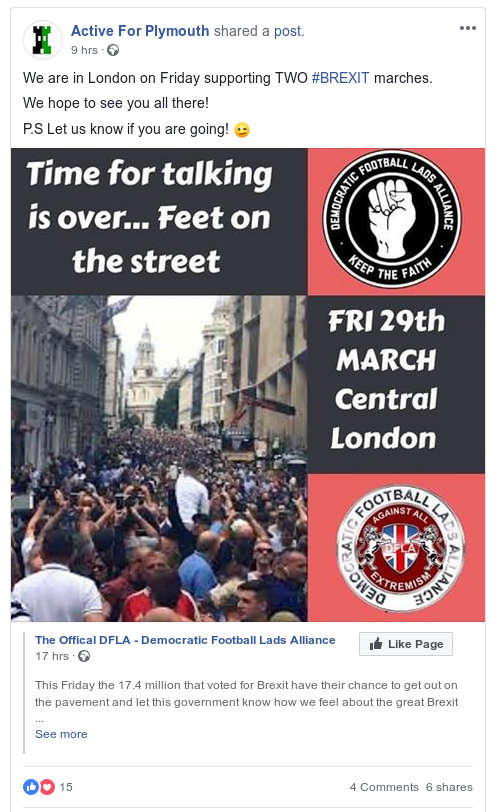 After marching with them, the party escalated to promoting Tommy Robinson and For Britain openly: 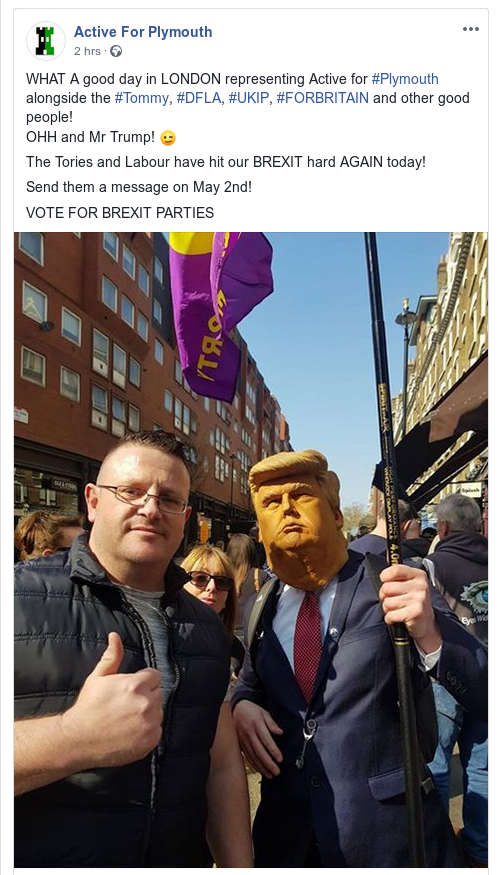 The most concerning thing about Jason Shopland is the circle of people around him, which includes violent extreme right and terrorism supporters. The evidence for this comes from facebook, so it’s not cast-iron proof. Even so, just for a man to be “friends” with these people should set alarm bells ringing...

Here is his friend Al Holbeach arguing that the victims of the  New Zealand  terrorist attack "had it coming":

...and trying to blame the attack on Muslims 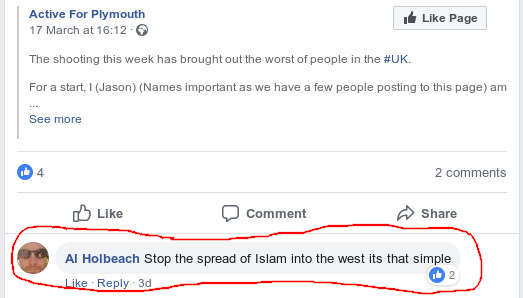 Jason’s had it all pointed it out to him, but this "Al Holbeach" character is still helping run Active for Plymouth's facebook group at the time of writing. It seems supporting terrorism is acceptable for this party? Since Jason is an admin he can remove Al Holbeach any time he wants... 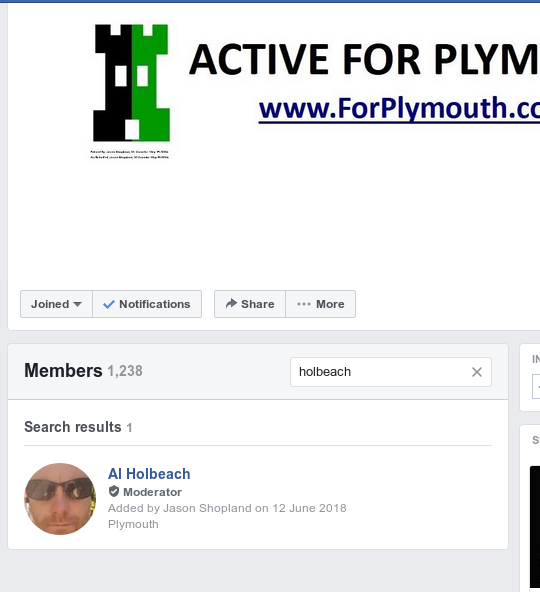 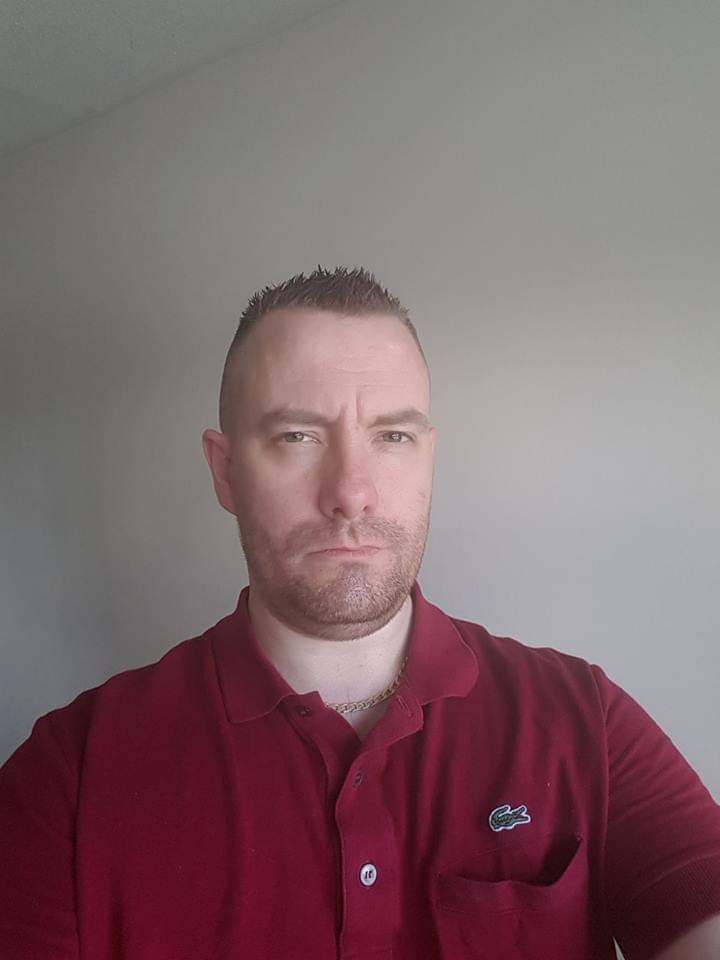 Jason's friendship group also includes extremists who claim to be in the hooligan firm "The Central Element". A facebook friendship doesn’t mean they’re friends in real life, but let’s agree the man has some questions to answer. Perhaps he should start deradicalising his own before he goes after other groups?

Here's Danny Robinson (right) holding a UVF flag, alongside Gary Miller (not on Shopland’s friend list) carrying a TCE Flag (The Central Element). The UVF is a proscribed terrorist group who did the worst bombing in the north of Ireland during the troubles [8] 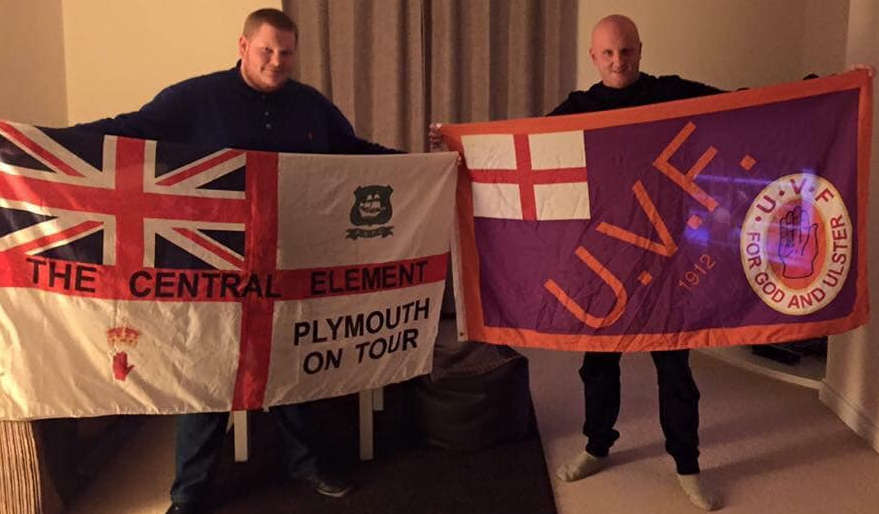 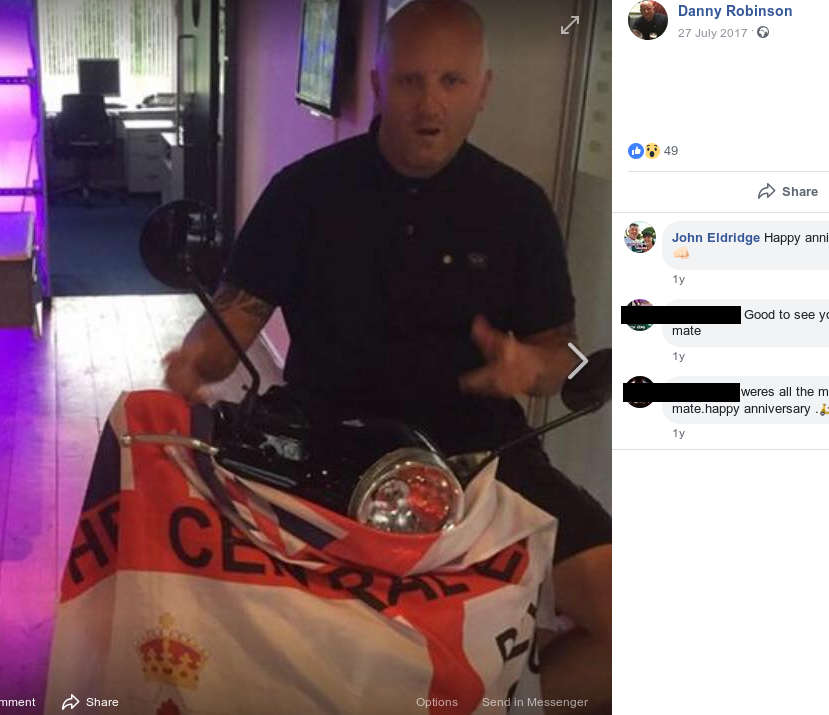 Danny Robinson was a member of the racist BNP,  seen in a leaked BNP membership list in 2008 [9]

Here's another facebook friend of Shopland’s, Gaven Hewett (aka Gavin), promoting terrorism to the public from his house 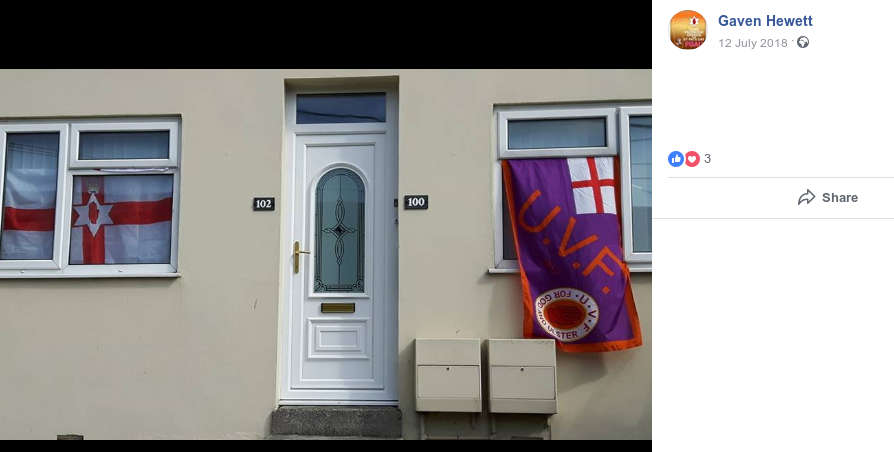 and seig heiling, even at an Argyle game (bastard) 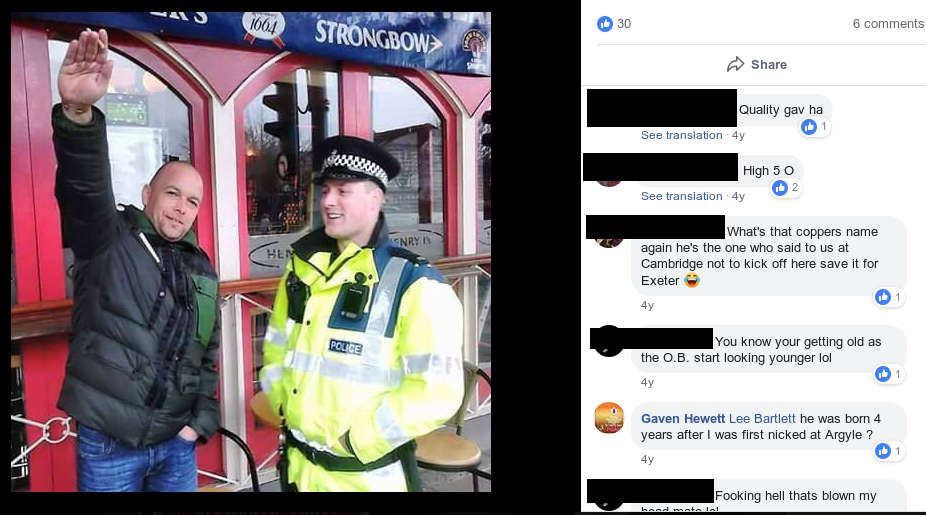 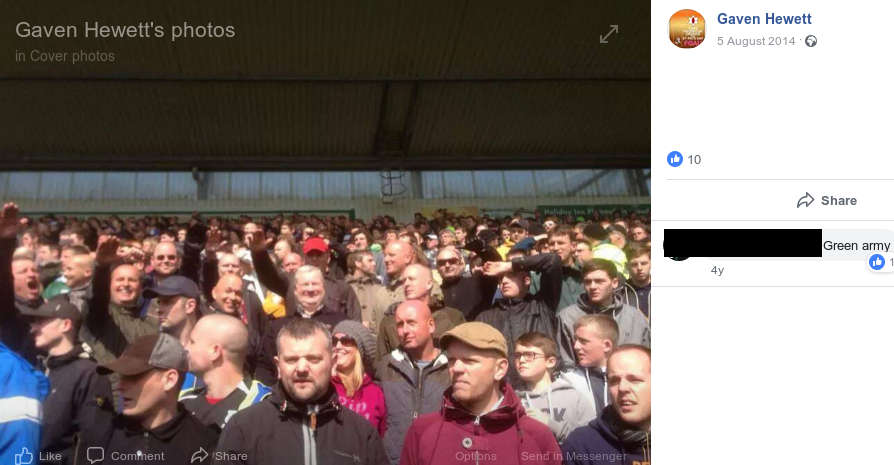 Hewett is a member of the Active For Plymouth facebook group too... 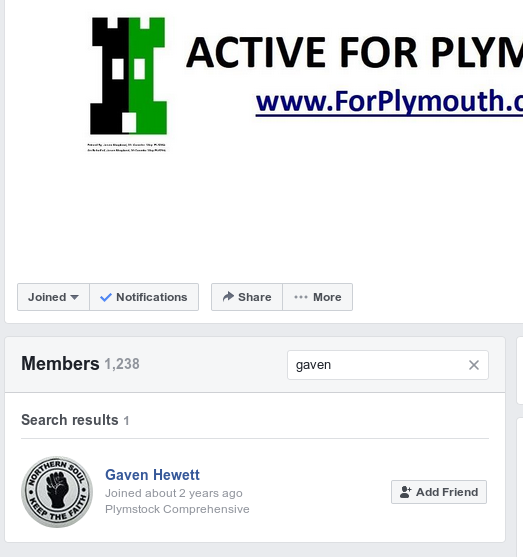 In 2004 while a member of the BNP, Hewett was banned from every takeaway in Plymouth for hurling racial abuse at staff and throwing things at them - [10]

Brian Hornigold, added to the group by Jason himself, is a blatant neo-nazi. His profile picture is a well-known neo nazi symbol [11], and he’s publicly posted the famous neo-nazi “fourteen words” quote, from David Lane who formed far right terrorist organisation “The Order” [12] 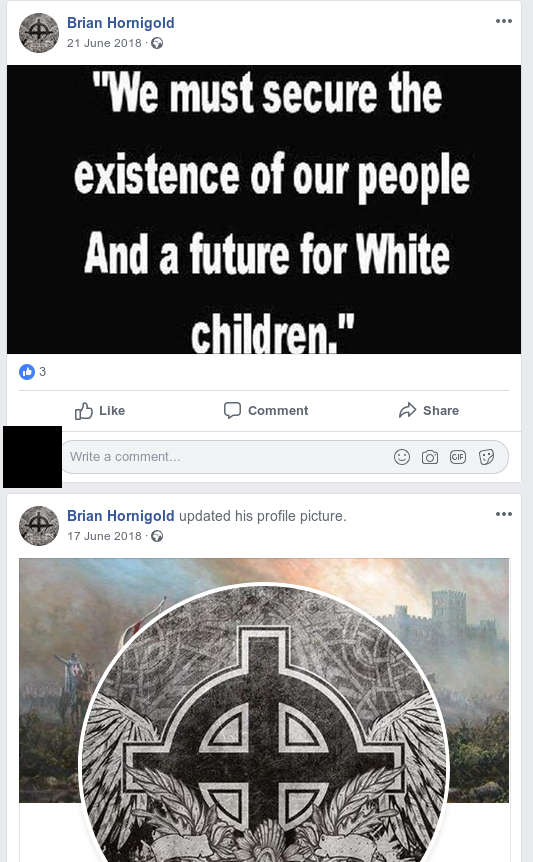 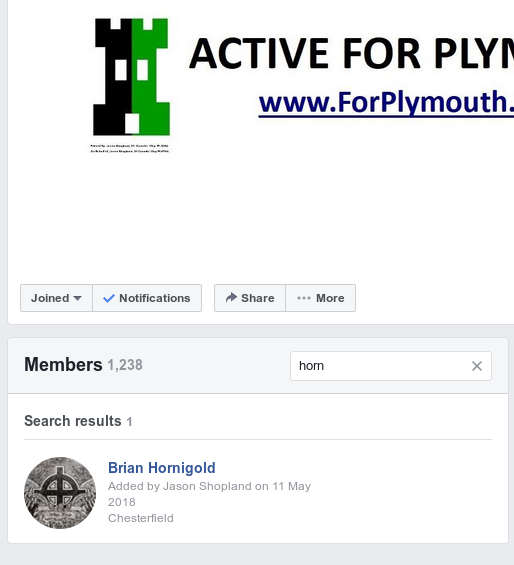 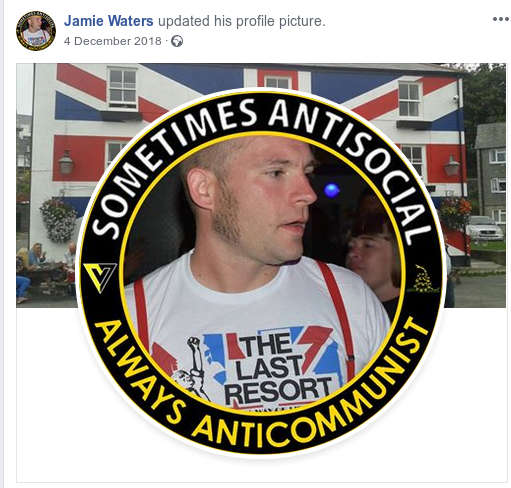 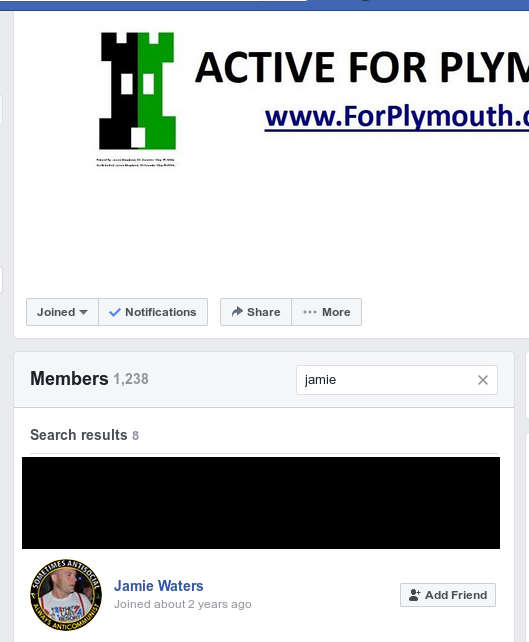 Should someone with these connections be chair of a political party representing Plymouth? HELL NO!

Steve Minns, another of their candidates, fancies himself a racial comedian. Here are his facebook posts, you can judge for yourself… 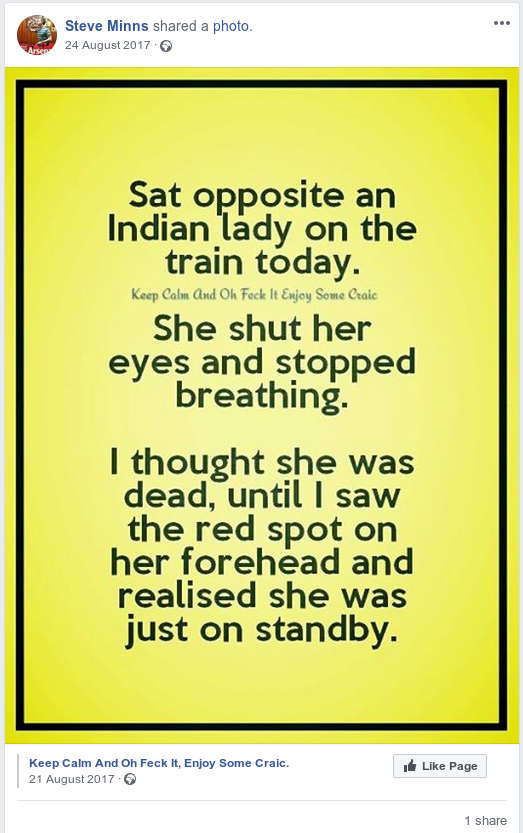 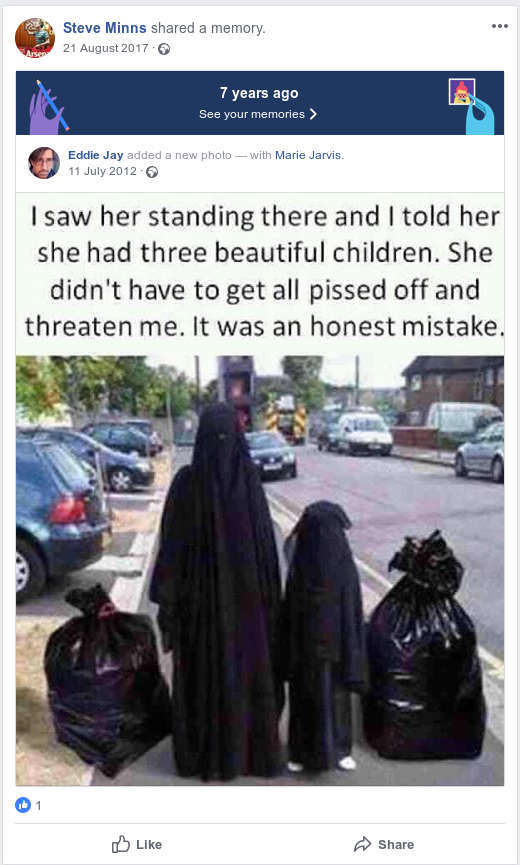 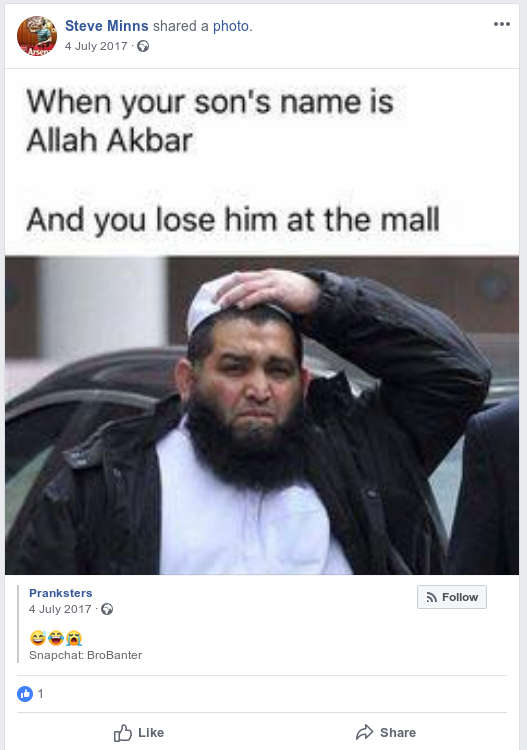 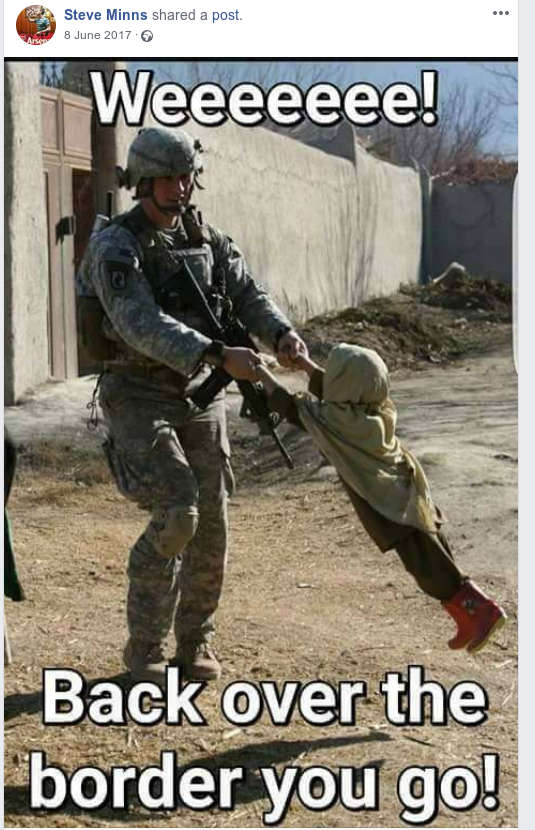 Here’s the ugly mug in case you were wondering

Since this article quoted the far right, it's only right to end it pointing out what's wrong with them. Not just Active for Plymouth but the movement they're part of.

So firstly travellers. There are not enough legal sites in the UK or in Plymouth, simple as. [13] [6] Even though making them would take barely any land at all. [14] And this is despite decades of broken promises, and decades of self-help foiled by a corrupt planning system. Ever since the government forced travellers from the roadsides many have been hounded from one site to the next. An that’s not to mention discrimination from the police [15], and biased portrayal in the mainstream media. [16] So Active for Plymouth's policy of "forcing" travellers from unauthorised sites adds up to racial harassment. With nowhere to go they will be forced to abandon their culture. Which is what Jules the Gypsy-Hater seems to want.

Secondly on imigration they have no idea what they're on about. In Popescu's video he seems to say everyone with a job offer should be able to migrate? “If you come here to work, great. If not then we don’t need you, we don’t  want you.” [17] That would mean a lot more migrants than there are now! Fair enough, but I don't think that's what they were aiming at. Vague policies like "more control" give people a mask to hide behind. Both Labour and Tories have been saying the same words for years after all. So what does Active for Plymouth really want? We do know Jason Shopland doesn’t want refugees settled in Plymouth [18]. (Even though his own Freedom of Information request revealed only 31 people have been settled here) [19] . For the truth about immigration, the TUC’s booklet “migration and the South West” is good - https://www.tuc.org.uk/research-analysis/reports/migration-and-south-west

Since For Britain and the rest of the right talk about grooming gangs, that deserves a quick word too. For the truth listen to the actual survivors, like Sammy Woodhouse [20]. Who, by the way, has criticised the way the far right is going about this. [21]

Finally, a starting point on terrorism – since For Britain also talk about this. The far right has organised lots of protests against terrorism. Fucking pointless if you ask us. Who's going to listen, the terrorists? And as to getting the government to fight terrorism better, totally up the wrong alley. The government already harasses and interrogates thousands of innocent people they think are Muslim. Ever heard of Schedule 7? [22] Unless we stop them wasting resources on innocent people then all we'll do is cause them to fuck with more people for no reason.

Meanwhile, what is the left doing? WE are the ones who have been fighting ISIS! [23] [24] It is thanks to left-wing Kurdish forces that ISIS has been pushed back and back until they have nothing left. [25] Many uk left wing activists have gone over and given their lives fighting against that terrorist death cult. Yet the far right insult them by acting like facsists and islamaphobes are the ones resisting ISIS. Nonsense!

This article was published on 21 April 2019 by the SolFed group in Bristol. Other recent articles: