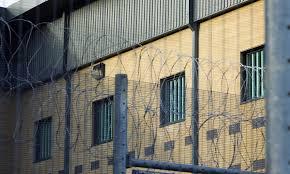 Around fifty people, coming from Brighton and London, gathered with banners placards and different items to make as much noise as possible. The protesters visited both detention centres.

Apart from denouncing the existence of these jails for those whose only crime is have crossed a border, the aim was to let the prisoners know that they are not alone.

During the action, we could wave at some of the migrants who saw us from the windows of their cells, with mixed feelings of anger and solidarity.  Then, outside the second detention centre that we visited, the protest was closed with a speech about the situation in the detention centres and with the intervention of, via phone, of  an inmate.

The company of the cops, being as usual unwanted and offensive, did not have major consequences.

Brighton-SolFed wants to congratulate the organisers of this protest, especially to Brighton Migrant Solidarity.

Of course, those jails are an attack to the most basic rights to migrant people, which every decent person should oppose. However, the detention centres are just part of a deeper problem. It is the racism that the authorities are practising and trying to inoculate in the society. Their aim is divide and exploit us because nothing scares them more than the international solidarity of the oppressed.

Brick by brick, wall by wall, racist prisons must fall!

PS. Our solidarity as well with the antifascists who were opposing the far-right in Portsmouth the same day. https://antifascistnetwork.org/2016/05/07/blink-and-youll-miss-it-fascists-in-pompey/

This article was published on 11 May 2016 by the SolFed group in Brighton. Other recent articles: