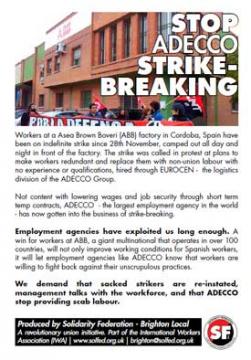 Workers at a Asea Brown Boveri (ABB) factory in Cordoba, Spain have been on indefinite strike since 28th November, camped out all day and night in front of the factory.

The strike was called in protest at plans to make workers redundant and replace them with non-union labour with no experience or qualifications, hired through EUROCEN -  the logistics division of the ADECCO Group.

Not content with lowering wages and job security through short term  temp contracts, ADECCO  - the largest employment agency in the world - has now gotten into the business of strike-breaking.
Employment agencies have exploited us long enough. A win for workers at ABB, a giant multinational that operates in over 100 countries, will not only improve working conditions for Spanish workers, it will let employment agencies like ADECCO know that workers are willing to fight back against their unscrupulous practices.
We demand that sacked strikers are re-instated, management talks with the workforce, and that ADECCO stop providing scab labour.

This article was published on 19 January 2012 by the SolFed group in Brighton. Other recent articles: