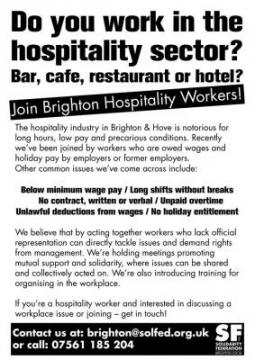 Victory in wages dispute! Following a prolonged campaign against a high-profile Brighton grocer, a former cashier worker & BHW member has received £1,250 in owed wages and unpaid holiday entitlement. The worker, who was on a zero-hours contract, was sacked without notice following 3 weeks when the bosses refused to give her any hours. She was also owed holiday pay from the previous & current holiday year for leave she was prevented from taking.

Our demands were issued in a letter citing working time regulations & with a financial breakdown of money owed, including a demand for average pay for the 3 weeks of denied work. The grocery's owners attempted to retain control throughout the conflict by trying to isolate and intimidate the former worker, cancelling meetings at the last moment, withdrawing offers and threatening to sack staff. However, BHW stood firm and matters recently came to a head when the worker, supported by a comrade, demanded a meeting in the bosses' office. Meanwhile, a potential picket of 16 SolFed & BHW members made their presence felt outside, armed with leaflets informing customers about the exploitative conditions inside. Clearly anxious at the threat of direct action and the bad publicity this would create, payment was immediately made in full.

BHW currently has members among the cashier staff and they'll be reporting on developments at the store, which has earned a reputation for bullying management, illegal contracts and a lack of dignity and respect for workers. This is the fourth successive wages victory for BHW & SolFed and testifies to the strength and effectiveness of workers' self-organisation, solidarity & direct action.

Brighton Hospitality Workers is an initiative of Brighton SolFed and was formed in response to the widespread exploitation of workers, many of them immigrant, in Brighton’s hospitality sector. We hold weekly advice & propaganda workshops, flyposting of busy areas and a stall on Saturday afternoons where we distribute workers’ rights info and raise the profile of BHW by approaching workers in local businesses. Brighton SolFed has recently dedicated their newsletter, Direct Action Solidarity, to BHW, and a PDF is available below.

This article was published on 5 May 2014 by the SolFed group in Brighton. Other recent articles: