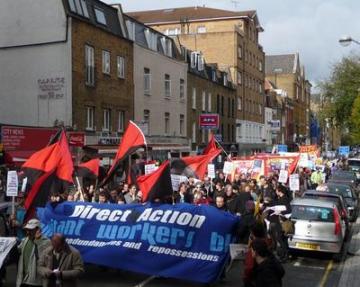 We join the fight against the cuts now because they will bring immediate and real hardship and suffering to working people. But the answer does not really lie in a readjustment of the government’s budget.

The real answer lies in a fundamental change in the way we organise our society and economy. The fight over cuts is symptomatic of the fight between the wealthy, the capitalists, and the workers. It concerns how the wealth generated in society is distributed: but a slight shift one way or the other is not enough.

No more do we want to see working people shoulder the burden for the rich:  the burden of work which enriches them, or the burden of paying for a mess of their (the rich) own making. What we want is a fundamental shift so that all the wealth generated within society is shared equally by all.

No bank or capitalist controlling the means of making wealth and creaming off the profits. No false wealth being made by playing games on the money or commodity market. Just people in society working together to provide what is needed, for the benefit of all.

The South London SolFed local produced a leaflet which was distributed on the march, which can be found here.

This article was published on 24 October 2010 by the SolFed group in Brighton. Other recent articles: