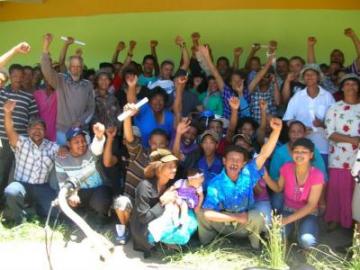 Farm workers in South Africa are currently on strike to demand higher wages and the right to organise in the face of a programme of suppression and intimidation by the predominantly white farm owners and in defiance of the political and Trade Union establishment.

The farm workers are engaged in a wave of strikes seeking to challenge the endemic problem of poor wages and a lack of organisation in South African farms. It is estimated by Human Rights Watch that less that 3% of farm workers in South Africa are organised whilst most earn the minimum wage or below. Farm workers are often isolated due to a lack of public transport and are also highly reliant on farm owners who often own the land they live on, provide access to credit and control the only means of transportation in and out of the farm, giving them great power to discourage organisation. Poor conditions and poor treatment of workers is rife, with stories including workers at one farm being forced to live in pigsties. Some farms continue to ‘pay’ workers through the ‘dop system’, whereby workers are given alcohol in lieu of wages.

Against this the striking workers have demanded increased wages, an end to intimidation by bosses and the right to organise freely. The strike, which began in De Doorns early in November before spreading to other farms across the Western Cape and North West provinces, has so far been largely organic and leaderless, rejecting the established political and union hierarchy and taking COSATU, the ANC-affiliated Congress of South African Trade Unions by surprise. Indeed, what union involvement there has been has come largely from smaller, more independent unions such as the CSAAWU (Commercial, Stevedoring, Agricultural and Allied Workers Union) and Sikhula Sonke, a women-led farm workers union. Furthermore, there are ongoing efforts to organize worker committees on striking farms in order to increase the level of organization, take part in wage negotiations and prepare the workers for further action.

The reaction of the farm owners and the state has been fierce. Efforts at suppression by owners have been heightened, with dismissals of workers, the use of private security thugs, threats of the eviction of workers from their farm-owned homes and one farm owner even arrested for shooting at striking workers. Police too have sought to clamp down on strikers, with several violent confrontations and scores of dawn raids and arrests and taking place over recent weeks, as well as the murder of farm workers Michael Daniels and Bongile Ndleni (who reports suggest may have been killed by private security). The police have also helped to ‘escort’ workers from other towns onto farms where workers are on strike. Simultaneously, the political and Trade Union establishment have sought to regain control over the situation, with COSATU seeking to claim leadership of the movement around its demand for a minimum agricultural wage of R150 a day and joining with acting Labour minister Angie Motshekga to call for a two-week suspension of the strike on the 14th of November whilst they consider the farm owners’ offer of a mere R80 a day.

Nonetheless despite these attempts at suppression and cooption strikes and resistance continue. There are demands for a national agricultural strike if the farm owners do not agree to a R150 a day wage by the 4th December. Furthermore, a statement from the CSAAWU union released on the 20th November illustrated the discontent not just regarding low wages but with the whole structure of land ownership, arguing that “if bosses continue to threaten mass retrenchments, the question of ownership of land will come to the fore.” Finally, some striking workers have gone beyond strike action into acts of sabotage, destroying crops and vineyards in their struggle against the bosses and sabotaging roads to prevent police vehicles from passing. Alongside striking mineworkers, the striking farm workers seem to be mounting a serious challenge to the white farm owners and to the cooptive power of COSATU and the ANC.

Brighton SolFed has links with the South African movement through a former member now active in organizing workers in the country. We are planning to organize a benefit for the CSAAWU union early in the new year.

(Image courtesy of the CSAAWU union)

This article was published on 22 November 2012 by the SolFed group in Brighton. Other recent articles: