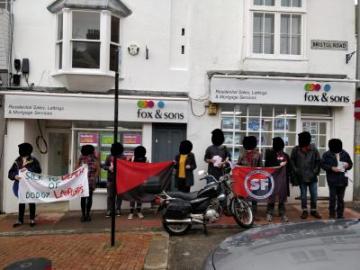 Brighton Solidarity Federation has started a dispute with Fox & Sons, a large estate agency with branches across Brighton. Along with six student tenants, Brighton SolFed wrote to Fox & Sons on November 3rd, demanding that they pay compensation to the tenants, who were told five days after the day they were meant to move in to a property that it had been withdrawn, leaving them with nowhere to live. Fox and Sons’ employees offered no help finding an alternative property, other than suggesting one over the students’ budget. They didn't communicate properly with the tenants, telling them that the property would be ready to move into by early September, which it wasn’t.

The delay and eventual cancellation of the tenancy was because of unfinished refurbishment works, which the agency was likely to have known would overrun before they informed the tenants of this. At this point, the agency also had over a thousand pounds of the tenants’ money in fees, which they did not refund until nine days after they had informed the tenants that they could no longer move into the property. This left the tenants out of pocket whilst they were urgently looking for somewhere else to live.

Our demand is that Fox and Sons pay £380 compensation to each of the tenants. This amount equals the difference in rent for the year on the more expensive property the tenants were forced to find at the last minute. Fox & Sons did not respond to this demand until we staged a well-attended picket outside the Kemptown branch on Saturday 10th November. Since then, their Area Lettings Director has insisted that the problem will be dealt with via their internal complaints procedure. It takes fifteen working days to even receive a response from this procedure, and ourselves and the tenants think the issue is clear. These tenants have had to rent more expensive accommodation than they can afford as a direct consequence of Fox & Sons’ mismanagement of the situation with the property the tenants were initially meant to move into. Therefore, Fox & Sons should pay the difference in rent for the year as compensation for this.

Agencies try to hide their mistreatment of tenants in complaints procedures, which take a long time, which have no guarantee of compensation, and which isolate tenants from one another. As this year has shown, when we take our problems to the streets, we have the power, as well as the solidarity of other tenants to back us up. Through solidarity and direct action, ordinary people have the power to improve their lives!

This article was published on 20 November 2018 by the SolFed group in Brighton. Other recent articles: