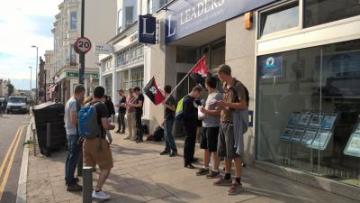 Brighton SolFed has started a dispute against the Western road branch of the letting agency Leaders. The agency facilitated an eviction attempt against a tenant that failed after a court hearing. SolFed has been trying to find a settlement for the dispute the last couple of weeks. Along with SolFed, the tenant is fighting for compensation for loss of earnings and damage to her health.

The failed eviction process caused the tenant months of instability whilst she was suffering from a serious illness. While the tenant was a few weeks late with rent because of illness, she had informed the agency that this would be the case, and was told that it would be ‘no problem’. At this point, the tenant had already been at the property for a year, and paid rent in six-monthly instalments.

Just two weeks after being told it would be 'OK', and with no warning from Leaders, the tenant was issued with an eviction notice by the landlord. The tenant then settled her arrears and paid five months advance rent, a contract renewal fee, and a voluntary indemnity of £300. The tenant had thus paid to stay in the property until at least late June 2016, which should have meant that eviction could not be pursued during that time. However, it was: the tenant received news in early March that she had two weeks to move out. To add insult to injury, Leaders informed her that they would not be refunding the thousands of pounds of rent she had paid until an unspecified date after the moving out process was complete.

The tenant felt that it was wrong for the landlord (with Leaders’ backing) to be attempting to evict her half way through a tenancy she had paid up front for, particularly given its mitigating circumstances – that by this point, she was scheduled for a major operation. To the ongoing detriment of her health, the tenant had to cancel this operation, because the insecurity around her housing situation meant that she was not confident she would have somewhere stable to recuperate. The stress of the court proceedings that the tenant had to go through in order to defend her right to stay only made things worse. Ultimately, the judge who heard the case intimated that eviction proceedings were invalid whilst the tenancy was ongoing, and the landlord dropped the eviction order as a result.

It is as a direct consequence of this situation that the tenant’s health situation today has declined to the point where she requires a more serious procedure than the one scheduled in March. It was a series of miscommunications by Leaders that led to this failed eviction process, which caused five months of intense stress for the tenant, negatively affecting both her health and her capacity to work.

Along with the tenant, we issued a letter to Leaders, outlining the tenant's grievance with their handling of this situation, and setting out a series of options for compensation for loss of earnings and damage to her health. After one week, Leaders declined to offer the tenant any compensation. Subsequently, we have begun a public campaign about this situation, beginning with a picket last Thursday 11th and Saturday 13th of August.

The response from the general public has been both sympathetic and positive. We have been talking publicly about the issues not only that are specific to this situation, but also that underline it and which affect most people, such as the need for six month advanced rent payment if a guarantor cannot be provided when earnings are not deemed high enough, the added expense of agency administration fees, the short length of tenancies, the high cost of rent, and the power that letting agents exercise over tenants.

The problem for the agency is that SolFed does not hide disputes in administrative or judicial procedures. Our intention is to bring every dispute onto the streets. Not just because it is faster, cheaper and more effective, but also because it is the only way we can understand that each of us has the same problems. Through solidarity and direct action, ordinary people have the power to improve their lives - and ultimately create a new society.

Stay in touch for news of further action, and boycott Leaders if you are currently in need of an agency. If you are also having trouble with Leaders at the moment, we'd like to hear from you - we're stronger when we fight together. You can get in touch at housing@brightonsolfed.org.uk.

This article was published on 17 August 2016 by the SolFed group in Brighton. Other recent articles: