Multinational banking group Santander was targeted for union busting across the breadth of their empire on Tuesday 1st October 2013 by the anarcho-syndicalist International Workers Association (IWA). A number of actions were held in Britain by the Solidarity Federation (SF-IWA). In Bristol, the local SF-IWA section was joined by members of Bristol Anarchist Federation, BARF & migrant Spanish workers to deliver a message of resistance to the company and solidarity with the sacked union organiser of the Spanish anarcho-syndicalist Confederación Nacional del Trabajo (CNT-IWA) union. The CNT has been organising within Isban, a computer services company owned by the Santander Group into which thousands of workers have been transferred. Workers at Isban are controlled and dismissed through the use of employment agencies.

The May Day Rally in Bristol saw a large Red and Black presence leading the march through the centre.

Members of Solidarity Federation joined the Radical Workers' Block. The red and black flags flags waved and demands of "Fire to the bosses" cried out. Others in the block included members of the Anarchist Federation, the IWW and other local anarchists.

The rally ended in Castle Park, where Trade Union activists, made tired and boring speeches about the need for Leadership and putting pressure on the Labour Party. The Anarchist Federation stood by, holding a banner proclaiming TUC censorship, drawing attention to the Trades Council ban on anarchists on the platform and allowing any mention of the historic roots of May Day.

The continuing struggle against workfare was taken, by Bristol Anarchist Federation, to the door of shameless exploiters at Homebase. Bristol Solidarity Federation responded to the request for support and turned up to spread the clear message - "Workfare is Slavery"

After it was recently revealed that management at the Haringey branch of Homebase had it tapped into a seemingly endless source of free labour. It was clear that a new target of anti-workfare activists was emerging. The Haringey store bosses had been caught bragging about that it was getting 750 hours of free labour every week in their store. 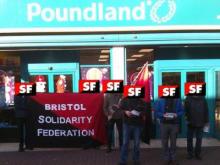 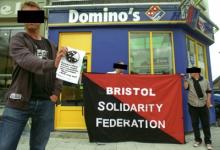 Anarcho-Syndicalist Federation’s (Australia), call for action, saw Bristol SF picket the Domino's store on Whiteladies Road, Bristol. This solidarity action was in support of the campaign for wage justice for delivery drivers who have had their wages arbitrarily cut 19%  by Domino's Pizza Enterprises management.

The Bristol Local members held the red and black banner across the door of the store and handed out leaflets to passers-by. We had taken time to explain to the workers inside the store the reasons for our solidarity action and gave them a copy of our leaflet. Our anger is against profiteers who steal from workers not other workers.

First we had the pay freeze, then came the pension cuts and re-banding of jobs. All the while we have also seen the privatisation aka ‘outsourcing’ of healthcare services and this continues abound. Now we have proposals for regional pay and changes to terms and conditions. Here in the South West, 20 NHS trusts have banded together to form a consortium designed to stitch us up further. Critics of the plans have described this consortium as a cartel. Their sinisterly named Project Initiation Document (PID) outlines the plans cooked up by senior health bureaucrats.

It would be a mistake to think that the Consortium’s proposals are out of step with pressure on existing national pay agreements. Under the Agenda for Change (AfC) national agreement that currently governs pay and conditions for NHS staff, proposals have already been mooted by employers in the following areas:

Dressed in prison garb Bristol Solidarity joined the 1st of May Group on their Workfare fashmob. The first action took place inside Primark, stunned shoppers were given leaflets as the Workfare Prisoners helped to stock shelves. Surprisingly security quickly bundled the workfare voulunteers out of the store. It would appear that having free-labour is only acceptable to them if the victims of this modern day slavery are hidden from the public eye.

Joining with actions across the country against Workfare, members of Bristol Solidarity Federation, Bristol Anarchist Federation, Bristol & District Anti Cuts Alliance, Youth Fight for Jobs, The IWW (union), Right to Work and others took to the streets as part of the fight-back against the Workfare providers.

Escorted by the police throughout, the 40 strong group headed straight for a Holland and Barrett's in the swanky Cabot Circus. Bemused shoppers were treated to punk classics from the wheeley-bin sound-system and gladly accepted a variety of literature outlining the perils of Workfare. Then the march headed-off to picket more of the cities Workfare poverty-peddlers. Primark, McDonalds, Greggs, Wilkinson's and another Holland and Barrett were targeted.

Bristol Solidarity Federation picketed a branch of giant employment agency and arch strike-breakers Adecco last week in solidarity with striking workers at the Asea Boveri Brown (ABB) factory in Cordoba, Spain. The strike was called in protest at ABB plans to make workers employed at the factory by subcontractors EULEN redundant and replace them with EUROCEN non-union labour with no experience or qualifications. EUROCEN is the logistics division of the ADECCO Group of companies. The dispute was fuelled by serious breaches of health and safety in the factory and by management's refusal to honour collective agreements. Adecco has been providing scab labour to try and break the strike.

Plans to have a twenty-four walkout by public sector workers have led to Cabinet Office Minister Francis Maude branding the protests as “stupid and wrong”. He also threatened tough new laws to make it harder to strike.

Bristol Solidarity Federation members will be joining and supporting the “Day of Action” from start to finish. We call on workers from all industries to also join the strike. Stop work, refuse to cross picket lines, support the striking workers anyway you can and join the rally from College Green. Join the picket lines that will be going on right up to midnight.