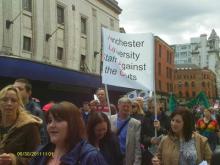 After the last UCU pensions strike in March, several rank & file union members, upset at the lack of inter-union unity, set up the Manchester University Staff Against the Cuts group (MUSAC). The group has been meeting regularly and consists of members of Unite, Unison and UCU. Members of Manchester EWN are also involved.

It has been good to meet with people whose criticisms of the existing unions match our own in many ways. The group has held a weekly stall in the University, giving out leaflets in support of various anti-cut campaigns.

The experience of sacked nurse Karen Reissmann, and the inability of industrial action to achieve her reinstatement, serves as a timely reminder of the shortcomings of today’s unions in their ability, desire and commitment to effectively support workers in struggle. But all is not lost and for the anarcho-syndicalist solution to the tyranny of capitalism and yet more sell-outs, read on!

Despite the tenacity of Karen’s local Unison branch, who remained on strike up until her appeal, the response of the union nationally in promoting solidarity for her cause was pitiful. In fact, the wholly inadequate response from the Unison leadership contributed to the defeat of the strike every bit much as the actions of the Primary Care Trust bosses themselves. 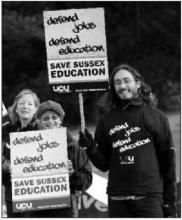 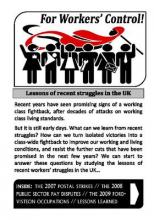