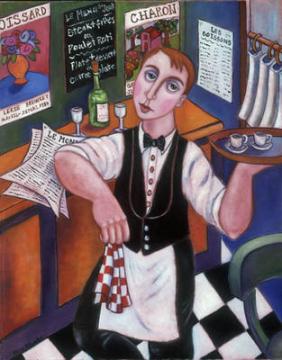 The beginning of October saw the first anniversary of a change in the law designed to give waiters 100% of their tips.  It was brought in because many café and restaurant owners were routinely taking advantage of a loophole in the law which allowed them to use their workers’ tips towards the wage bill.  Despite being rewarded by customers with extra money for their hard graft, waiters were being paid only the minimum wage by unscrupulous managers.

The then Labour government, prompted by campaigns by Unite the Union, passed the law on 1st October 2009.  But one year on, there are still problems front of house.  According to Dave Turnbull of Unite, “There are still too many employers who regard tips as a subsidy for low pay and who see the tips and service charge money left by customers as a pot of cash to which they are free to help themselves.

“Unite members working in restaurants, hotels and bars across the country have seen establishments increase the percentage of service charge they deduct from their pay packets.”

Unite’s response to this is to propose further campaigns to get the government to act to put pressure on employers.  Some of their members protested outside the Business Department last week, supported by no less than John Prescott, famous ex-shop steward and waiter in the merchant navy – now Lord Prescott.

However, what this demonstrates is the fact that the law is a paper tiger.  For a year now the law has demanded that waiters get all of their tips – but employers know that they can find ways to get around it.  The law also says that workers must be paid in full for work done – but as the Solidarity Federation has learnt recently rogue employers in Brighton are ignoring this and using the recession as an excuse not to pay up.

No amount of pleading to the government will change this situation.  The only sure way of getting what we are legally entitled to is to demand it directly from our bosses in our own workplaces.  Workers facing this kind of threat to their livelihoods need to stand together to demand their full wages and tips.  This should be backed up with the threat of industrial action appropriate to the situation.

We recognise that this is no easy task – employers hate their authority to be challenged.  But if you decide to stand up to your boss you are not alone.  Brighton Solidarity Federation is committed to acting in support of local workers having difficulty with their bosses.  We provide training in workplace organising, as well as direct support and solidarity in your dispute.

So get in touch to discuss how we can help – brightonsolfed [AT] googlemail.com

This article was published on 10 October 2010 by the SolFed group in Brighton. Other recent articles: