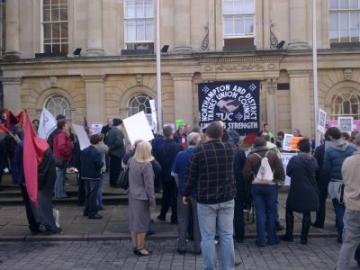 Members of Northampton Solidarity Federation joined the protest outside the county offices this afternoon to oppose the cuts being decided upon inside.

In honour of the event the red and black flags of anarcho-syndicalism were waved causing a few people to come and ask us who we were and what we stood for.  A good chance to discuss our position in relation not only to the cuts, but to government and capitalist economy in general.

As a perk, many happy punters went home with a copy of Catalyst under their arm.

As for the event itself, it was a fairly mild affair, with a few speakers and a few chants.  All in all, less noise was made than at the picket in the morning, when a bunch of kids turned up in green t-shirts and enlivened the event.  Radical at 5 years old...

The next official anti cuts demonstration in the town is set for 12th March.

This article was published on 24 February 2011 by the SolFed group in Northampton. Other recent articles: