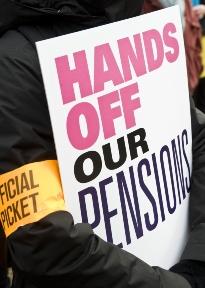 Wednesday 28th March saw the NUT and UCU out on strike over pensions.  The strike was only for the Greater London area rather than nationally.

Some of us began the day visiting the sparks demo at the Shard, which while it had reduced numbers was still fairly lively. Those of us not striking or having to work that day visited friends to stand in solidarity with them on strike in Hackney, where there was a good militant picket line. A mixture of sun, coffee and lollipops kept everyone going throughout the morning till we could all head off to the café.

Unfortunately this does not seem to be the case across the capital; while we can’t get a complete picture, from what we’ve heard talking to friends and comrades is that pickets have been faltering in numbers, and a few more workers were going in. The march in central london was little over 5000 people, many it seems have been a bit demobilised and demoralised. This is due to various factors but it seems mainly because of the fact that other unions have dropped out, that there is no clear way forward to escalate the strike and win and due to peoples confusion as unions sent out surveys and tested the water instead of just calling a day.

What will happen next is anyone’s guess; there’s been talk of strike days in April, though which unions will take part is not yet clear. Realistically though if we’re going to have a chance of winning the pensions dispute or struggles against cuts in the future we can’t wait for union leaders who seem committed to ‘managing defeat’, we’re going to have to link up with our fellow workers on a grassroots and rank and file basis and take on going action together.

This article was published on 29 March 2012 by the SolFed group in North London. Other recent articles: