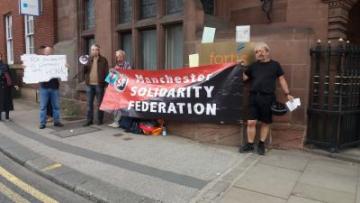 Before starting the protest, we requested to meet with Fortis management in an attempt resolve the dispute. However, Fortis responded in their usual way by locking their doors and refusing to engage even in conversation with their tenants. We then phoned Fortis from outside their office but they would not answer their phone. As Fortis refused to even to talk to their tenants, let alone meet with them, we went ahead with the protest.  We received a positive response from people passing by with plenty of drivers sounding their horns in support.

Though Fortis would not talk to their tenants, they were more than happy to talk to the police. A police officer arrived and informed us that they had received a complaint about the protest. He, unlike their tenants, was allowed into the building and after talking to Fortis; he came out and informed us that blowing whistles was not a peaceful form of protesting. One can only assume that he felt we were blowing are whistles too violently.

The campaign against Fortis will continue with further protest planned. Since starting their campaign the tenants have been contacted by students living in other building run by Fortis with horror stories about rat infested building and terrible living conditions. It would appear that Fortis nationally are charging students thousands of pounds in rent while utterly failing to meet even their most basic of responsibilities as landlords.

Boycott Fortis!
Join the protest against Fortis!
Organise against abuses in housing!

This article was published on 19 June 2018 by the SolFed group in Manchester. Other recent articles: