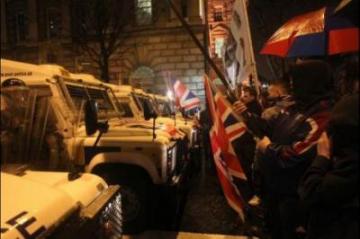 A member of the Belfast local (in-formation) comrade has written this article to be read in conjunction with this piece we published last week.

On December 3rd Belfast City Council decided, by 29 votes to 21, to reduce the number of days the Union flag was flown above the city hall from 365 to 17 days a year.

Within minutes of the vote a protest of over 1000 loyalists broke through the rear gates and into the grounds of the city hall. One security guard and a number of police were injured.

Over 8 weeks later (as we go to press) we have witnessed disruption as a result of protests and roadblocks. There have been riots against the PSNI and a number of sectarian clashes particularly around the Short Strand area, often as protesters returned home to east Belfast. There have been attacks on council buildings outside Belfast, on politicians (particularly, but not exclusively those from the Alliance Party) and their cars.  Unionist and loyalist politicians, Sammy Wilson (of the DUP) and Tommy Kirkham (former Independent deputy mayor of Newtownabbey, expelled by the UDA ‘Inner Council’ in 2007), have managed to blame all of this on anarchists!

The protestors are well aware that direct action targeting Belfast’s ‘neutral’ city centre (and the profits of our business class and other capitalists) is having an impact. The response from many republicans, unfortunately, along with much of the left, has been marked by smug hypocrisy, crass sectarianism and vilification of the protestors as plebs and chavs. Many who should know better are joining the media in criticising the protestors for being unemployed and uneducated. This has also been the response of middle and upper class Unionism. Ironic then that the UUP and DUP did much to ratchet up tension coming up to the flag vote at Belfast city hall, and despite this attitude are now hoping to reign the plebs back in through the Unionist Forum.

Lets be clear, we are not defending the ideology of Loyalism. Nor are we seeking to defend the flag! As libertarian communists we would rather all these rags that are used to blind us to our real interests were burned.

The legacy of disadvantage faced by some in the ‘catholic’ section of the working class may be borne out in statistics from the likes of the Peace Monitoring Report 2012 showing that “the proportion of people who are in low-income households is much higher among Catholics (26%) than among Protestants (16%)”. The fact is that things are getting worse for all working class communities and that this differential will only be further eroded as more and more and more of us are plunged deeper into poverty by governments following ‘austerity’ measures that protect the rich and hammer the poor. The pretence that nationalist representatives can gain ’equality’ for ‘their’ community must increasingly be fought on a cultural terrain. They have, like unionist politicians, accepted the ’reality’ of neo-liberalism. On this terrain and in a society so divided along sectarian lines what we are witnessing is serving to reinforce sectarianism and communal zero-sum politics at the expense of the working class as a whole.

Loyalism/Unionism and Republicanism/Nationalism both serve to distract us from the very real, shared interests of working class people across the north, the rest of the UK and this island. They are interests we share locally and globally.

We need to start working together to build protests over the issues that matter to us all. None of us has benefitted economically from the mythical ‘peace dividend’. None, that is, except the rich. We need to engage in the real war that is being waged against us all - the class war.

This article was published on 19 January 2013 by the SolFed group in Liverpool. Other recent articles: