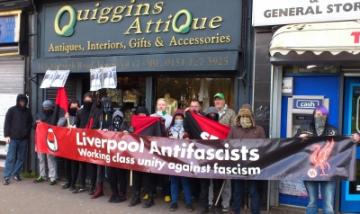 Throughout the event, Tierney stayed within his shop and kept it closed until around 2pm. It was due to have opened at 10.30am.

Read full reports from Solidarity Federation members who attended at Truth, Reason & Liberty and One Solution.

This article was published on 29 April 2012 by the SolFed group in Liverpool. Other recent articles: