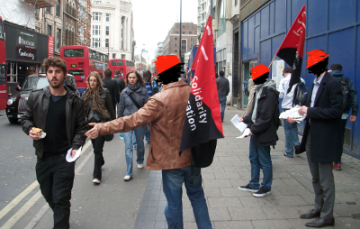 APRIL AND May saw the Solidarity Federation (SF) engage in an escalating campaign of  “disruptive action” against a part of the world’s largest employment agency. A successful international campaign of pickets and communication blockades resulted in an Office Angels temporary worker being paid wages withheld from him since last December.

The worker, Dan, contacted SF in March after trying to negotiate with Office Angels by himself. He had worked as a temp for them for three days in December but had not been provided with a time sheet. When he queried this, he was assured that this would not be a problem. After the job finished, he called in to Office Angels to collect his wages. To his surprise he was told that he had worked one day, not three – this despite having received a call from Office Angels at work on the third day.

SF responded to Dan’s request with a picket and a delegation sent to the Wimbledon Office Angels branch where he was initially employed - resulting in Dan being banned from all Office Angels premises. Next the London Locals of SF chose to picket the most visible Office Angels branch – Oxford Street, central London – where they spoke to management, demanded Dan be paid and informed them that action would continue until he received his full wages.

Following the visit to Oxford Street and a public call-out for escalation, Office Angels contacted Dan. He was told that “this has gone on long enough” and he would “definitely” get paid. When that didn’t happen pickets spread to branches outside London, and a ‘communications blockade’ was organised with support from around the world. The blockade saw hundreds of phone calls and emails sent to the Office Angels managers by individuals and groups, expressing their dissatisfaction with Office Angel’s unscrupulous employment practices. Thousands of leaflets were also distributed, highlighting Dan’s case and urging anyone who had suffered similar mistreatment to contact SF.

A national week of action was called, and preparations began for an international week of action against Office Angels’ parent company Adecco. The national week of action began with pickets being announced around the UK: numerous pickets in London, Northampton, Reading, Brighton, Oxford, Nottingham, Leeds, Newcastle, Manchester, Bristol, and Liverpool. On the Tuesday, Dan was again contacted by Office Angels. This time they told him they had documentation confirming that he had worked two days and would pay him for those. Still not satisfied, the next day’s communications blockade went ahead as planned. Wednesday morning saw Dan contacted again. Office Angels offered to pay him for the full three days – but with strings attached. Dan refused, and the pressure was kept on. The next day, Office Angels gave in and paid Dan the wages they owed him.

SF has a long-running campaign against casualisation and precarious employment. The fight against employment agencies is, predictably, at the forefront of such a movement. While this was just a small victory, it shows how ordinary workers can turn the tables on powerful exploiters by taking action together. The pickets even got the attention of Office Angels’ Managing Director David Clubb, who issued a statement regretting the “disruptive action”. Dan’s case is just the tip of the iceberg – but it shows that temp workers can stand up for themselves with collective direct action.

The Solidarity Federation would like to thank all the individuals and groups who took part in communications blockades and organised pickets as part of the campaign, with particular thanks to the Anarchist Federation (AF), Industrial Workers of the World (IWW) and The Commune as well as our sister-sections in the International Workers’ Association (IWA).