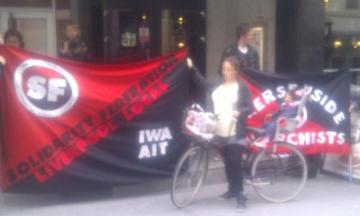 We managed to hand out a good amount of leaflets and to engage with several people who were themselves on the work programme. The claimants we spoke to were, to a person, all in agreement with our stance on workfare. Claimants placed in the position of having to accept unpaid work under threat of benefit sanction know they are being demonized and exploited, but many are unsure what they can do about it. We gave claimants an advice sheet detailing certain points which the DWP and A4e may be reluctant to tell them, and also managed to give out contact details to a few people.

Towards the end of our picket, the owner of the building, who we are all now familiar with and know as a world-class busybody and general bell-end, came out to complain about somebody on the picket who had the temerity to light a cigarette on the street outside his building but he was soon sent on his way with some choice words ringing in his ears and his parting shot was the usual threat of calling the police, which was ignored by all.

The latest picket and comms blockade has shown A4e that we won’t be going anywhere. The recent victory against Holland & Barrett needs to be a spur to keep the pressure on the exploiters to show them that they can’t get away with their exploitative practices without a real fight.

This article was published on 10 July 2012 by the SolFed group in Liverpool. Other recent articles: