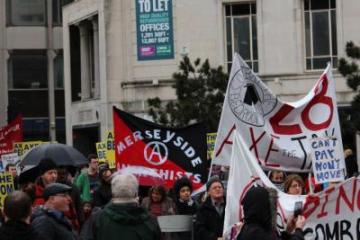 Report from one of our member's blog.


Today (Saturday 16th March) in Liverpool finally saw the knights in shining armour from the local Labour Party riding into town to rescue the city’s working class from the clutches of the evil Tories. Or at least that’s how the Labour left would like to portray the situation. The reality, as they surely know, is very different.

The grass-roots campaign groups from the south of the city met up a short distance away to march to the rally venue en masse and the numbers from the local campaigns easily matched what the Labour party was able to assemble. Word was passed around shortly after the march started that some local fascists had turned up to the rally and, sure enough, when we arrived a handful of them were trying to blend in with the people already at the venue.

This led to the frankly bizarre but not altogether surprising sight of Labour party stewards in high-visibility vests protecting the Nazis in their midst from being outed for what they were and being removed from the area. What kind of message does this send to any person from a minority group who might want to attend a demonstration in the future? Or is the Labour party that desperate to swell its ranks that it’s going to appeal to openly racist, homophobic scum like the boneheads who showed up today?

The rally itself was the usual mix of rhetoric and backslapping from the Labour-dominated platform with no ideas offered for actually fighting the bedroom tax beyond a petition. What is needed is true grass-roots and tenant-led organization around this and other issues. Tenants should have full ownership of their struggle. No single political group should be able to control and guide tenants in their struggles. At a national level, the Labour Party has already said it will not repeal the bedroom tax if they win the next election. They actually introduced the bedroom tax in the private sector in 2008 and planned to introduce it to social housing tenants if they won the last election. Where will this leave tenants in two years’ time, when victory in the general election will be achieved by the Labour Party and the tenants are no longer needed? As with those who fought against the poll tax, these people will be left up shit creek by the Labour Party.

But the bedroom tax can be fought. For the past several months in Liverpool, tenants have been very busy organizing local meetings, demonstrating at housing association offices and the town hall. There are community meetings happening regularly now in Dingle, Granby, Croxteth, Speke, Bootle, Garston and Norris Green as well as in Kirkby and on the Wirral and these meetings are looking at concrete ways in which tenants can support each other both locally and city-wide. Come along to one of the meetings.

There are also several other groups in Merseyside, including two in the Wirral and the large Stand Up in Bootle campaign.

A Public Assembly will be held on April 6th to bring all the various bedroom tax community groups together. Details to follow.

This article was published on 17 March 2013 by the SolFed group in Liverpool. Other recent articles: