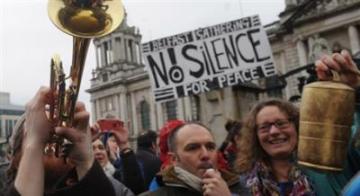 A member of the Belfast local (in-formation) writes...

On 16th December 2012 about 1000 people gathered at Belfast City Hall in the wake of 2 weeks of demonstrations, some of them violent, by Loyalist protesters angered by the City Councils' decision to fly the Union Flag only on 'designated days' rather than the full 365 days a year as it has done up until now. The gathering at City Hall was billed as being 'about peace' and 'to show that Northern Ireland has moved on'. Leaving aside the facts that the approximately 1000 attendees were 1000 out of about 3500 who had proclaimed to be 'attending' on facebook, and the fact that a Loyalist demonstration the previous day at the same location was able to attract roughly similar numbers, we have to ask, 'moved on' to what?, and for whom?

So assured were the organisers of the undeniable righteousness of their cause, that any comments on the facebook page for the event that did as much as raise reasonable concerns over safety and security (due to chatter on Loyalist websites) were deleted as being 'fear mongering' or 'trolling'. People who talked of Buddah and Ghandi got lots of 'likes'. Some described themselves as 'The REAL people of Northern Ireland' ; are the flag protesters figments of the imagination? Their agenda may be utterly reactionary, but they are certainly to be taken more seriously than this 'gathering'. The organisers of the protest are, of course, beyond criticism by virtue of their 'doing something'.

The event was also billed as being 'not about politics'. This chimes perfectly with the liberal sentiments behind it, and is perfectly in line with some of the more nauseating criticisms of the protests and protesters. Lacking not only a political analysis, it lacks a class analysis. Time and again, unable to articulate a proper political critique of the events, nice liberal people who 'just want peace' have inadvertently very much allowed the issue of class to intrude on the debate, as they denigrate the protesters for being unemployed, for dressing like 'chavs' or worst of all, for disrupting Our Wee Economy. The middle classes in the form of local business people are losing money and it just wont do. The Continental Market might not come back for your other arm and leg next year. One might think that the protesters real crime was to come from the sorts of areas that have most definitely not 'moved on'. The word 'flegs' (a phonetic spelling of the way a pleb with a Belfast accent might pronounce the word 'flag') has become something of a meme.

We need to talk about politics, not to be 'non-political'. We need to state clearly that the 'politics' that have resulted from the Good Friday and Saint Andrews Agreements have copper-fastened a sectarian carve up of society and led to more physical and ideological barriers being put up between communities. Working class communities, that is.

We also need a proper political critique of the protests, beyond them being nasty and violent and not very xmas-like. Of course the protests and the ideology behind them are utterly reactionary and the naked sectarianism often on display is revolting. But more than that, it is depressing to see working class people demonstrating, often violently, their loyalty to a state, a ruling class, a monarchy that cares nothing for them except perhaps as cannon fodder and perpetrators of barbarism in its overseas adventures; revelling in their own and their forefathers willingness, then and now, to volunteer to be that cannon fodder. "We'll fight anyone to stay British - including the British" said Harry Murray during the Ulster Workers Council strike. The lack of evolution in thinking is laid bare.

Rather than hope that we can just all get along, we need to state that Unionism/Loyalism and Nationalism/Republicanism are reactionary ideologies all the time not just when they 'turn violent'. Of course a detente between them in terms of armed action is preferable, but ultimately they offer nothing to the working class except more division; division that impedes the type of united action that is needed if these communities are to start to turn around their disenfranchisement.

Obviously Loyalism and Republicanism are easy to critique; their agendas are in the open, clearly stated. What makes 'The Peace Gathering more pernicious is that we need to dig deeper, below the surface of the seemingly apolitical fluffiness to analyse what it really stands for. Really it amounts to no more than a call for capitalism as usual. It may not be the intention of the organisers to make it so, and probably plenty of people attending might consider themselves to be socialist or left wing in some way, others probably individually share the criticisms of our political institutions; but that is not reflected in the messages coming from the event. The most constant is the criticism of the protesters for the effects of their actions on the xmas trade (nobody seemingly wondering why people would give a fuck about disrupting an economy in which they have no stake, which in fact actively works against them). People were urged on the event page to make sure to go and spend, spend, spend in the Continental Market after the rally, to make up for its loss of trade over the past two weeks. The 'new Northern Ireland' right there, xmas consumerism run rampant. The irony of course, is that capitalism as usual will not bring these good people the peace they so earnestly desire. As capitalism continues its current heightened attacks on the working class, we could remove 'sectarianism' with a magic wand tomorrow, yet the worst off communities would still explode in anger as they did in UK cities in August 2011. As the state sheds more and more functions of welfare (social security, housing provision, health care) it retains one thing; the necessary armed force to contain the inevitable responses from people denied these basic needs.

We can't all just get along and we need to be clear about the reasons why, not let them be obscured by something as vague as this rally. Attempting to clap away over 30 years of historical fact and material reality so you can do more shopping is ridiculous. As anarchists and communists, we very much want the removal of sectarianism from society, but not so that everybody can hold hands and go shopping, but so that some genuine class politics might emerge.

As if to underline the futility and irrelevance of 'The (first) Peace Gathering', it was followed on the very next night by some of the worst and most widespread disruption and violence that had happened up to that point (worse still has happened since). Undeterred, another 'gathering' took place on Sunday January 13th, right after a night of violence that has now become 'the worst yet'. The people behind it are seemingly oblivious to all evidence that it will end when the protesters want it to end, or the police forcibly end it (leaving the underlying causes untouched) or it simply fizzles out gradually. There wouldn't have been 30+ years of sectarian conflict if standing in front of city hall could stop it.

This article was published on 14 January 2013 by the SolFed group in Liverpool. Other recent articles: