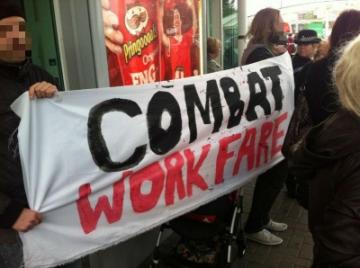 After being challenged on this and being unable to justify the order, the police tried a different tactic and began to read section 14. The picket stood its ground and refused to move, continuing to hand out leaflets and engage with the public. The sergeant who appeared to be in charge, number 1524, was particularly aggressive with the younger members of the picket. After a half-hour standoff with the police and a police call for more vans, the decision was taken to move the picket very slowly to the Smithdown Road entrance. The 50-yard walk took around 15 minutes and was followed closely by the police, who felt it their duty to hassle us all the way.

The picket set up on Smithdown Road, still with a reasonably heavy police presence, and again began to hand out leaflets and engage with customers and passers-by. Shortly after we set up, officer 1524 again began to hassle the younger picketers, getting into the face of one comrade and actually offering to meet him for a fight when he was off duty. The young lad stood his ground with the support of other picketers and the officer eventually backed down and moved away. While we were closely watched on Smithdown Road, the police now began to keep a distance and we were able to spread the anti-workfare message unmolested.

Overall, the day was a huge success, with a 20-strong picket getting its message across and refusing to be intimidated by the police. Hundreds of leaflets were handed out and conversations held with several members of the public, all of whom were receptive and sympathetic to the cause.

As part of our rolling programme of actions, next Saturday we return to Liverpool City Centre. Make sure you join us, and help reiterate our message that workfare is an attack on the working class and cannot be accepted.

This article was published on 18 June 2012 by the SolFed group in Liverpool. Other recent articles: