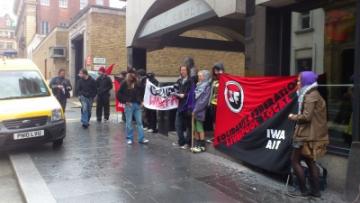 By comparison, the actual picket was rather muted. Unlike last time, the building owner never made an appearence to have a go at us, whilst the police appeared for all of two minutes. They literally parked near the picket, glowered at us for a bit, then disappeared. In the meantime, we carried on with what we were there for.

Liverpool Solfed members were as ever joined by other local anarchists who have been extremely proactive in the workfare campaign from the beginning. We handed out a couple of hundred leaflets to largely receptive passers-by, spoke to claimants using the A4e offices and received a number of supportive honks from passing cars. As on previous actions, we had people wishing us well in our campaign and keen to point out that their own pedigree as trade unionists whilst cheering us on.

After two hours, we wrapped up and moved on. But this will not be our last visit to A4e. Like "ethical" workfare providers Holland & Barrett, the profiteers will soon be sick of the sight of us. We will certainly be paying them at least one visit during the national week of action against workfare.

Until then, our next action will see us return to Asda in Wavertree this Saturday. It seems that our last action has already had an impact on their trade, and we need to maintain that pressure in order to break the back of those exploiting the unemployed. Make sure that you come along and get involved, to add to our collective weight. This campaign doesn't end until workfare does.

This article was published on 27 June 2012 by the SolFed group in Liverpool. Other recent articles: