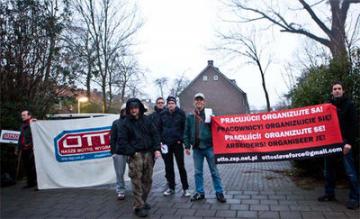 Some workers cheated by the OTTO temp agency are fighting back!

They don't get the conditions promised to them in their contracts and job interviews and the company makes money off a system of fines used at the workers' "hotels". The end result - people work and don't get paid, or they wind up paying too much money for substandard housing which does not meet the standards of the collective labour agreement OTTO is supposed to be following.

After some Polish colleagues working in Holland were cheated by the agency, they decided to take action. The Vrije Bond in Holland, ZSP in Poland and Priama Akcia in Slovakia have all started taking action to both inform workers of their rights and encourage them to organize and take action.

Actions started on February 11. OTTO recruiting offices in Slovakia and Poland were visited. In Holland, some worker hotels were visited then and on the weekend. Information was handed out, informing potential workers about what could happen and informing people of their rights and what they can do if they have problems. Already there is a group of former workers ready to act.

We were informed on Friday that one of the former workers, who was waiting for payment for the last month of work, was fined 1000 euro but is not sure what for. This is what OTTO is doing: they refer to some "regulations" people are supposed to follow, but never gave them to these people, never had them sign that they received and agreed to these "regulations", and they do not even provide people with documentation on what they are being fined for. In this way, they skim workers' salary at their discretion and hope that none of them will fight back.

We are demanding that OTTO pay all the money they owe to these people: not only paying the money for these bullshit fines, but also money they didn't get for the first weeks of work, for sick days and equivalent for holidays.

Besides this, the campaign hopes to achieve the following demands for all OTTO workers:

1. End to fine system.
2. Give whats in the contract and what is promised.
3. Improve housing , esp. to comply with ABU CAO (collective labour
agreement). Agreement guarantees 10m per person, proper sanitary
conditions, etc.
4. No delayed payments, no short payments. They are obliged to pay all
in full by the 10th day after the end of the month.
5. There is a discrimatory contractual penalty. Workers are fined 500
euros if they quit without notice, but employers can terminate without
notice. This fine should be eliminated, especially since many workers
quit work because they are not getting what they are promised. Then they are fined 500 euro.
6. End to penalty about confidentiality. Workers should be able to
describe their work conditions freely.

More about the problems in OTTO can be found on the campaign website: www.otto.zsp.net.pl