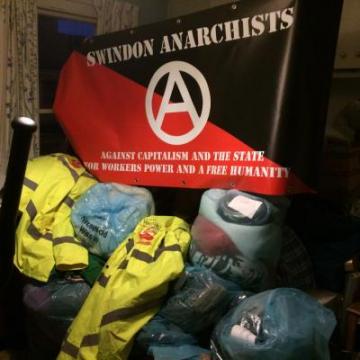 From the start of our campaign, we worked closely with Swindon People’s Assembly, who offered us invaluable support in raising funds and donations as well as organising a strong and well attended demonstration in Swindon town centre in support of refugees and migrants. We would also like to offer massive thanks to Swindon Pulse, who promoted our campaign, donated much needed supplies and acted as a drop off point for donations. We were also offered useful advice and practical support from Swindon-Calais Solidarity, who have been doing invaluable work in Calais for months.

Over the course of 2 months, we raised £1000 and piles of really decent donations, including warm clothes, tents, sleeping bags, scarves, thermal socks and gloves. The campaign started with a demo and awareness raising event in town, at which People’s Assembly and its supporters leafleted and collected funds and donations. This was so successful that over £300 was raised in a couple of hours, and the influx of donations was so great that a local farm had to step in to store them!

From then, until our visit to Calais, we were inundated with financial and material donations, as well as much appreciated work buying supplies and generally helping out from comrades in Swindon Anarchists and others.

Our day started dropping off larger supplies at a brilliantly organised warehouse, staffed by a dedicated team of very on-it volunteers. After that quick stop, we drove a short distance to head into the camp.

When we reached the camp, we found many of the residents without adequate access to food, warm clothing or shelter, as well as large numbers of French riot cops keeping a high profile and intimidating presence. While mainstream propaganda would have us believe that camp inhabitants are almost entirely young and male, we were shocked and saddened by the large number of young children we encountered. The supplies we brought with us were well received, and we ended up being invited to a Sudanese section of the camp for tea. A high point of the day came when we gave an Iraqi man, captain of the camps Iraqi team, a football. After a quick chat, it turned out he knew Yasser Kasim, a Swindon and Iraq player. We were surprised to know he is seen as the star of the Iraqi team, while the refugee we spoke to found it hard to believe that he’s been sh*t in a Swindon shirt lately! During our stay, our Sudanese hosts and others of a range of nationalities stopped for a chat. Many were eager to know what the British government were doing to help. It has never been more difficult to say ‘f*ck all’, but that answer was expected by the majority, and we found a widespread and unsurprising hatred of Cameron amongst the people we spoke to. While we were unable to deliver any good news about the government, camp inhabitants were pleased to hear stories of the numerous solidarity marches and actions that have been happening across the UK. We also found a massive level of determination, with some refugees reporting up to 3 attempts per night to breach the security fences and enter the UK.
We left the camp feeling that our visit had been worthwhile, and have already made plans for a return trip, during which we will be able to distribute supplies that the refugees themselves have told us were most needed.

To help fund the trip, and show your solidarity with the Calais refugees, please donate at
gogetfunding.com/Swindon-chippenham-aid-to-calais

To get involved, drop us an email at Swindon.anarchists@yahoo.co.uk
For a world without borders!

This article was published on 6 November 2015 by the SolFed group in Bristol. Other recent articles: