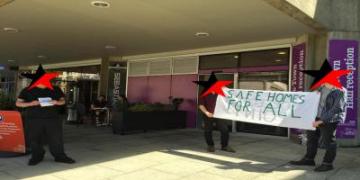 On 31st July, members of Brighton Solidarity Federation, along with Bobby Carver and members of his campaign, met with Brighton & Hove City Council’s Executive Director for Neighbourhoods, Communities & Housing, Larissa Reed. You can read more about how this meeting came about here.

Prior to the meeting, ourselves and the Bobby Carver Campaign had issued three clear public demands to the council, which were based on Bobby’s – and others' – experience of the council’s housing department. The demands were as follows:

1. An end to at-a-distance housing suitability assessments
2. That third-party groups are allowed to attend these assessments
3. That any assessments that had exceeded the 8-week deadline were carried out within two weeks of the meeting

Bobby Carver and his campaign began the meeting by explaining the failures of the council in these three areas in relation to Bobby’s case, whilst members of SolFed picketed outside, informing council workers and passers-by of the meeting and its demands. Bobby waited 9 months for his first housing suitability assessment – considerably longer than the eight-week limit – and it was carried out using Google Maps Street View, which council officers used to conclude that the property was suitable because of its proximity to a bus stop. Bobby also explained the need for third-party groups to be able to attend assessments based on his experience of botched follow-ups to this assessment, with an inspection of another flat in his block by maintenance workers taken as evidence that Bobby’s flat was suitable for him.

Ms Reed responded to these explanations and to these demands by informing us that at the housing team meeting on Thursday 3rd August, she would be informing all staff that the department would be adopting a new way of working in which assessments are not to be carried out at a distance. She also agreed that third-party organisations could attend these assessments ‘within the law’, and that she would be carrying out an investigation into how many assessments have exceeded the 8-week limit, why, and implementing changes to stop this from occurring. The outcome of this investigation, Ms Reed promised, will be emailed to Solidarity Federation by Friday 1st September.

We know it’s easy for bosses, landlords, and council workers to make promises. We also know that they usually only keep them when they’re made to by organised workers, tenants, and claimants. We’re glad that Brighton council have said that they will no longer be carrying out housing assessments at a distance, that third-party organisations can attend them, and that they are investigating how many have exceeded the 8-week limit. However, we don’t put much hope in these processes; what we know works is self-organised mutual aid, solidarity, and direct action.

If you’re having trouble getting the council to carry out a housing suitability assessment on your home and at your home, or if they’ve said they’d do it and it’s taken them longer than eight weeks, and you want to fight back and join other tenants in making sure they keep their promises, get in touch with Brighton SolFed at housing@brightonsolfed.org.uk, or send a text to 07427239960.

This article was published on 9 August 2017 by the SolFed group in Brighton. Other recent articles: