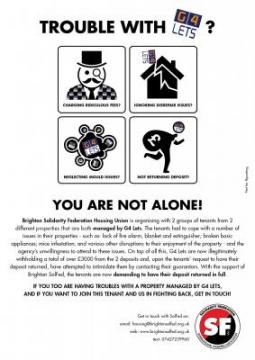 Brighton SolFed is continuing its campaign against local letting agents G4 Lets into the new year, as the agency has not yet made an adequate offer to meet the demands of two groups of tenants. Both groups are asking for the return of their deposits and for compensation. In one instance, tenants were charged for pre-existing damage to the house they were living in, which was damp and infested with vermin throughout their tenancy; in the other, tenants have been charged for wear and tear and for redecoration costs, even though they had the interior of the property repainted professionally before they moved out.

As part of this ongoing campaign, and because of the unwillingness of G4 Lets to accept their mistakes, Brighton SolFed has contacted the landlords of the two properties in question. As with G4 Lets, we appraised them of the situation and offered them the chance to negotiate with the tenants. As with G4 Lets, they have missed our deadlines and failed to accept their culpability in the problems with the two properties.

Because of this failure to engage, we are extending our public campaign to cover the two landlords in question, as well as the letting agent they have chosen to administer their properties. The landlord of 11 Queen’s Park Road is Andrew Kinnear, and the landlords of 43 Beaconsfield Road are Adrian and Judith Batchelor.

Mr Kinnear is the director of Sussex-based Lurbeck Properties. In his words, this consists of a property portfolio of some 70 houses. According to his company’s latest accounts, from December 2016, it is worth some £10.4 million in terms of its total assets.

In our brief correspondence with Mr Kinnear, he said: “Perhaps unusually, in the case of 11 Queens Park Road, when the tenants moved out, I went into this property with my four sons to redecorate it top to bottom … I own a portfolio of some 70 houses and so I'm very used to dealing with properties coming back in various conditions at the end of tenancies”. Given that Mr Kinnear was apparently planning to redecorate the house anyway, and given his company’s financial position, it is striking that the tenants’ attempts to reclaim their £1,000 deposit have so far been met with silence. While £250 each is a lot of money for a group of students in one of the most expensive cities in the UK, it would not appear to be very much for Mr Kinnear.

Adrian and Judith Batchelor, who themselves live in a £1.5 million property outside of Brighton, have so far failed to respond to our letter.

Recently, the campaign has been attracting increasing attention from local and national media. In response to this, G4Lets have made legal threats, stating that ‘if any statements are made that are slanderous or libellous we will have no hesitation in taking legal action’. It is ironic that an agency that attempted to charge tenants for the cleaning of a carpet that had been replaced is apparently concerned with ‘false’ accusations about their conduct. G4Lets have also been provided with over ten pages of evidence to support the tenants’ claims, including invoices, pictures, and email chains, but have so far refused to make an adequate offer to resolve the situation.

The problem for G4lets and for these landlords is that the solidarity we have been shown already goes to demonstrate that agencies cannot treat tenants like this, and testifies to the widespread and increasing frustration on the part of tenants in Brighton and beyond. Tenants looking for properties have emailed us to say they will now not be renting through G4Lets, whilst we have heard numerous other stories of G4Lets' neglect of their tenants from those offering support to our campaign. Recognising how our problems are shared by others grants us real power to fight back against the appalling neglect that threatens the safe and peaceful enjoyment of our tenancies. Through solidarity and direct action, ordinary people have the power to improve their lives.

This article was published on 9 January 2018 by the SolFed group in Brighton. Other recent articles: