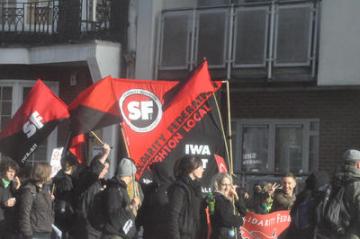 Brighton SolFed were out in force today for the public sector strikes, which saw a huge turnout of perhaps 10,000. Three feeder marches converged on Victoria Gardens in the city centre before marching around town and ending with a rally at the Level. A brief personal report and pictures are below:

Biggest march I've seen in Brighton, I'd guess 5-10,000. Couldn't see the back or the front of the march and it was overflowing the Level where it ended. Cops tried to randomly arrest a bystander and apparently some black bloc types dearrested them. There were three feeder marches from across the city, one from council offices/hove town hall, one from whitehawk/the hospital and one from the universities picking up the parks and bin workers. There were huge cheers when the cityclean workers joined the feeder march from the unis. Very tangible sense of cross-sector solidarity. University of Sussex Students' Union propaganda calling for a campus shutdown in support of the strikes covered local train stations. Conversations on the picket line at Sussex University. Anarchist banner at one of the Sussex Uni picket lines. Mass picket at the main entrance to Sussex Uni campus. In contrast to Sussex management, Brighton University admitted defeat and reportedly closed all three campuses for the day. The main rally at the Level Brighton SF on the march.

Red and black flags fly (for the meaning of the flag, see page 2 of our strike bulletin).

Some of Brighton SF (and friends).

This article was published on 30 November 2011 by the SolFed group in Brighton. Other recent articles: