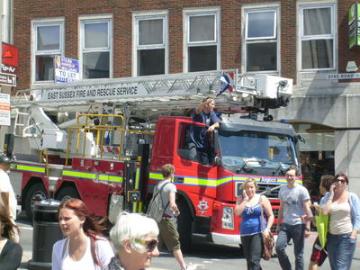 The June 30th strikes were well observed in Brighton, with the vast majority of schools shut, five picket lines across the city and a huge march and rally through the town centre.

Jobcentre picket: PCS and supporters set up banners & stall at 7am. BBC radio interviewed PCS organiser & interviewer disclosed that he was going to London after to plan future NUJ action. 2 pickets formed, at entrance to Jobcentre and at staff entrance. Approx 10-15 non-union staff arrived early and entered building. A solid picket of 30-40 formed by 8.15, ready for 8.30 opening. Much beeping of car horns and public goodwill. 2 supporters handing out claimants' leaflets were told forecourt is private property and were physically removed by security.

One of security, who said he was a GMB member, warned that police were called but they failed to arrive. Claimants were allowed into building but unless they had appointments were told to go home and phone helpline, so that scab staff could report Jobcentre open as usual. All claimants who were offered leaflets took & read them and some struck up conversations & joined the picket. Local Green MP spoke at 9.45 criticising false divide between public & private sectors. Some claimants were seen later at the rally.

BHASVIC college picket: 30+ on a very lively picket line. The position on a major junction meant the horn blasts in support from passing motorists were near-constant, and met with a vocal response from the pickets each time.

Crown Prosecution service picket: 15-20 manned this picket line, mostly members of PCS but 5 or so supporters. There was good support from passers-by beeping horns, taking leaflets and stopping to chat. The strike was fairly solid, although prosecutors are in a different union and weren't striking, so the office was open. There were also picket lines at Brighton University and City College.

Following the morning’s picket lines the march and rally were far bigger than expected! Police estimated 4,000, and it could have been more but was impossible to estimate from the middle. That would make it the biggest weekday demonstration in Brighton since the Iraq war broke out 8 years ago. There was also a lot of support from passers-by and other workers. Firefighters even parked an engine up along the route and waved NUT flags from the cab.

From talking to pickets, it was clear most saw this as a political strike against cuts in general, not simply an issue of pensions. There was also a general sentiment that this was just the beginning, and the high morale bodes well for that. Ordinarily 'public opinion' is not decisive in industrial disputes. London tube strikes are often unpopular but successful, whereas many popular struggles have failed.

But this isn't just a single battle over pensions, it's a war over the terms of our relationship with capital and the state: whether we will retire in poverty, whether we have an NHS, whether our jobs are casualised, whether benefits exist to support us in unemployment or ill-health... It's going to take a real movement to defeat austerity in Britain and across Europe, and widespread public support for the strikes is a positive sign. How the strike movement develops, and how mostly non-unionised private sector workers, the unemployed and others can get involved remains to be seen.

This article was published on 4 July 2011 by the SolFed group in Brighton. Other recent articles: