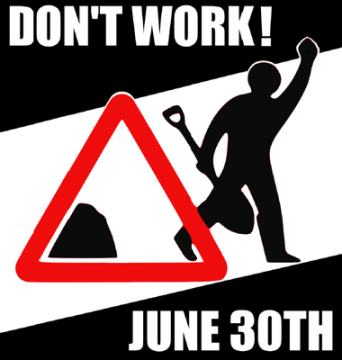 WHAT DOES it take to stop the cuts? June 30th represents the first co-ordinated strike action against austerity, under the pretext of defending pensions, due to the legal restrictions on joint strikes. But how do hundreds of thousands of people stopping work help stop the government?

At first glance, it might not seem to make sense. Cuts, we are told, are a response to a struggling economy. So why try and harm the economy by shutting large parts of it down for the day? But turn the question around, and what other option do we have?

Millions marched peacefully against the Iraq war and were completely ignored. We could wait four or five years and vote for Labour, but by then it’s too late. And anyway, Labour are committed to a cuts programme too. So striking is one of the only weapons ordinary people possess to go toe-to-toe with a state determined to force the costs of the financial crisis onto us (see centrefold feature).

This is not a question of there not being enough money anymore; it is a question of power. If ordinary people stand together, we can beat the government. They know this, and will try and divide and rule with stories of “greedy” public sector workers with “gold plated” conditions. Such words from the mouths of millionaires deserve nothing but contempt.

It will take more than one day strikes to defeat austerity. One need only look to the sustained strikes, non-payment campaigns and social resistance in Greece to see how far we may need to go. But by standing together and saying ‘no’, refusing austerity by refusing to work, we can beat the government by making the country ungovernable.