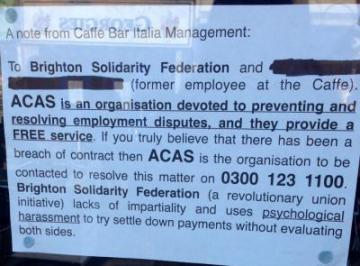 Brighton Solfed are continuing pickets of a rogue employer in Hove in solidarity with a former cafe worker, Yolanda, who is owed £1,264 in holiday pay and unpaid contracted hours.

Over the past week, Brighton SolFed have proved to the pathetic boss of Caffe Bar Italia that this dispute will not disappear by pretending that nothing is happening. We have been very clear: we will not stop until Yolanda is paid the hours that she had guaranteed and her holiday entitlement.

Last week, due to the boss failing to accede to our friendly suggestion that he pay the worker what she is owed, the dispute became public. After the first picket , we tried to contact the company again in order to explain that the conflict will finish whenever they decide to fulfill their responsibilities. However, we have only received denial of responsibility: "nothing to talk about", "go through the ACAS or the Courts". Bosses would prefer to resolve the disputes through a long and expensive administrative process, most of the time prohibitive for workers, but especially in a way in which they can keep their fiddling hidden from the public. Thus, during this week two pickets have been held in front of the business.

The first picket happened on Thursday morning. For over two hours, a picket was informing George Street pedestrians of the dispute. Two hundred leaflets were given out and we received a lot of support. Most of the people who had planned to go inside the café refused to do so after hearing about their practises. The boss, visibly nervous, refused to talk to the picketers and called the police. Once again, the cops confirmed that what we are doing is legal as we were simply protesting and giving information.

On Sunday, ten picketers visited Caffe Bar Italia and approximately three hundred leaflets were given out to pedestrians. It happened basically the same: the boss refused to talk to us, he said that what we were doing is illegal and called the police, and the police, again, said that we have the right to give information in the streets. We received a lot of support from the public. In this case, we could highlight that two women decided to go inside the café and tell the boss off and, again, a lot of people refused to buy in this café until they pay Yolanda.

Sadly, the attitude of the boss is making things harder but he is losing and has a lot more to lose. He is losing business and he is realising that we will not stop. He is more nervous each time we visit him and he tries to hide it by being cocky, or even aggressive. During the week, we have had to hear his traditional arguments: "What you are doing is not legal" or "You are only listening to one side of the story" and some new ones like: "You do this because you are lazy people" or "Communists". Nothing that we have not heard before.

Brighton SolFed will go on with the dispute until it is resolved. We consider it really pathetic and miserable to have workers on minimum wage, and try to withhold working hours and holidays on top. We appreciate all the support that we have received and the exemplary solidarity of the picketers. We are proving that workers don’t need anybody but themselves to make the difference! Stop wage theft! Caffe Bar Italia, pay up!

Brighton Hospitality Workers is a campaign against casualisation in the local hospitality sector initiated by Brighton SolFed. Whether it's bullying, outstanding pay, or sexism, we offer practical support to hospitality workers standing up to their bosses and organise. Since starting up in October 2013, we have supported numerous workers and won in every case.

This article was published on 23 December 2014 by the SolFed group in Brighton. Other recent articles: