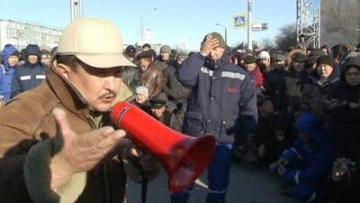 The scale of repression has been increasing steadily: during the conflict, hundreds of workers were laid off, an union activist, Zhaksalyk Turbayev, was killed by unknown persons, fire was set to the house of another activist, Aslambek Aydarbayev, and a trade union lawyer, Natalia Sokolova, was sentenced to 6 years in prison for "inciting social discord." Leading trade unionists Akzhanat Aminov, Kuanysh Sisenbayev and over 30 other unionists were also arrested and sentenced.

The regime of President Nazarbayev is widely known for his brutal suppression of the workers' movement and for his authoritarianism. He has declared the theory of "Eurasianism" (actively promoted by the Russian "new right"ethnographer Lev Gumilev) the official ideology.

In the nearby towns, there are rallies and actions of solidarity with the workers Zhanaozen. The authorities again opened fire, there are new victims.

We call for immediate protests to stop the massacre of workers in Kazakhstan. Please send letters of protest to the Embassy of Kazakhstan and to the company CITIC, hold pickets and demonstrations.

We also offer a call for a boycott of goods from Kazakhstan.